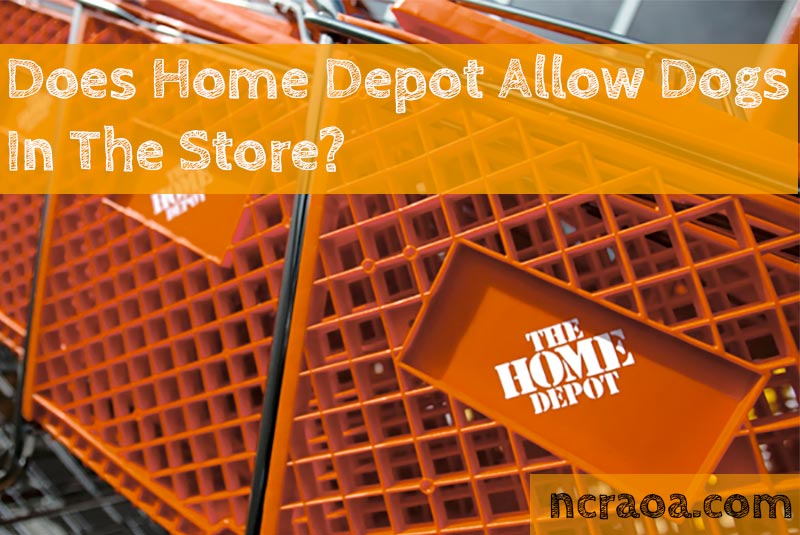 Many dog owners treat their pets just like family. They like to take them as many places as possible.

Most of us, however, believe that we can’t take our dogs into retail stores. While a lot of stores have strict policies regarding animals in their facilities, some are pet friendly.

The following is everything you need to know regarding the pet policy at Home Depot.

Contents show
Is Home Depot Dog Friendly?
What Is The Official Pet Policy At Home Depot?
Does The Policy Vary By Location?

Yes, most Home Depot locations allow dogs inside, even though that’s not the official corporate policy.

If you have one in your community, this is likely a place you’ll be shopping at on a regular basis. If you’re a dog owner, there will almost certainly be times when it will be convenient to bring your pet along with you to the store.

Many Home Depot stores are very dog friendly. Most of the stores provide wide aisles, making it easy to bring your pet along with you on a leash.

They also have large carts that can hold different sized dogs if you would rather push your pet along.

Obviously, people have a variety of opinions on whether dogs should be let into stores like Home Depot. Many, however, believe that this isn’t a good idea, even if they personally love dogs.

Some have stated that not only should people think about dogs biting other individuals, but they need to take into consideration that some people are allergic to dogs. Some people even think that there should be stricter polices regarding service dogs.

Other people feel differently, however. If it’s a hot summer day and they’ve been out with their dogs they don’t want to have to drive all the way home again or keep their dog locked in a hot car.

It’s just easier to bring their pet inside. They don’t see the problem if the dog is on a leash and well-behaved.

While this is probably true most of the time, the few cases that have ended badly cause many other people to want dogs banned from the stores. Even though there is a wide range of viewpoints regarding bringing dogs inside of the store, the fact remains that most Home Depot stores are dog friendly.

What Is The Official Pet Policy At Home Depot?

Even though many people bring their dogs along when shopping, the official policy for Home Depot is that only service dogs are allowed in their stores. A service dog is a dog that is specifically trained to assist people, usually those with some sort of disability.

There are employees that work for Home Depot that have service dogs helping them with their jobs. Some employees have vision problems and service dogs are permanently in the store to assist them as they carry out their daily job duties.

Although only service dogs are officially allowed in Home Depot, it seems that many stores throughout the United States usually don’t enforce this policy.

In general, as long as dogs are on a leash and the owners make sure they’re properly cleaned up after, most stores will allow dogs inside. It’s also important to remember that the official policy is made at the corporate level.

This means that individuals stores are probably given a lot of leeway when it comes to how strictly they’ll follow the policy. It should be noted that store policies may often change depending on a variety of circumstances.

Home Depot’s policy regarding dogs does seem to vary by location. Some stores have even placed notices on their website that states dogs are welcome in the store.

There may be stipulations, such as making sure the animal is kept on a leash at all times, but they are still generally allowed in most of the stores throughout the country.

Even if there aren’t any statements on each individual store’s website, many Home Depot stores will allow dogs inside. It seems to be left up to the discretion of the manager of each store.

If dog owners are wondering if they can take a dog into a Home Depot in their area, there are a few things they would likely want to do. First, check out the website for their particular store to find out if there is any information pertaining to animals in the store.

If there isn’t anything on the website, it’s probably a good idea to talk with one of the managers about bringing a dog into the store. It’s also a good idea to always have your dog on a leash. This is true even if it’s a small dog that you can carry or put in a cart.

While the stores in the United States may have a lax policy regarding allowing dogs inside, it seems that it’s a bit different in Canada. Canada has an official policy that only allows service dogs into their stores, just like the United States.

The Home Depot Canada follows a strict no animals in-store policy. The safety of our customers and associates is our number one priority. Certified service animals are an exception to this policy and are welcome in our stores.

Canadian stores, however, are actually pretty strict about enforcing this policy. Unless a dog is specifically a service dog and the owner has papers or other information to prove this, it’s probably not a good idea to try to take a dog into one of their stores.

An owner would need to prove that the animal they’re bringing inside is actually a certified service dog.

There are a few specific reasons for this strict policy. There was a case in 2011 that involved an unfortunate incident in a Home Depot in Canada.

An employee in Ottawa had her nose severely bitten by a dog coming into the store. This was a small toy dog that was being carried by the owner in a shopping cart.

Considering that such a small dog caused serious injury, the Canadian stores have since enacted strict policies about animals. What is surprising is that the United States has not yet put into place stricter policies regarding pets in their stores since there have been serious incidents here as well.

There have been cases in both 2018 and 2019 in which customers have been injured by other customers bringing in their dogs. You can see one instance in the video below.

In Colorado, a woman actually ran away from the store after her dog bit a man. The woman was eventually found and arrested.

If you’re thinking of bringing your pet into a Home Depot in the United States, it’s probably okay as long as they’re leashed and well-behaved. Just to be sure you’ll want to check the website or call the store before bringing your pet along.