There’s no doubt that Labradors are beautiful dogs. One look says it all!

Although Labs come in a variety of colors, only three are officially recognized by the American Kennel Club (AKC) for this breed.

These are yellow, chocolate and black.

Everything else is considered a deviation of these colors.

If you’re looking to deviate from the path when choosing the color of your pup, there are red, white and silver coat options to choose from.

This article focuses specifically on white and yellow Labs, their physical attributes and the differences between them.

Knowing more about these pups can help you decide which one to choose when you’re ready to add a Labrador to your family.

Contents show
White Labrador
Yellow Labrador
Differences and Similarities
Which Lab is Best for You?

Despite the variation in the color of their coats, white and yellow Labradors are basically the same type of dog.

White Labs are just a lighter-coated version of their yellow counterpart.

Technically, the AKC places white Labs in the same category as yellow Labs. 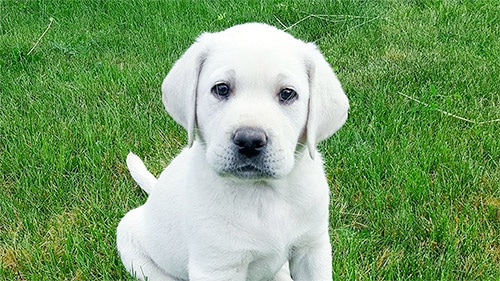 A white Lab’s coat may appear white in sunlight, but it’s usually a blend of white, cream, tan and yellow, which can be more noticeable around the ears and paws.

Genetic breeding is what distinguishes a white Lab from its black or yellow brethren.

Simply put, both parents had the genes required for producing a white-colored pup.

This doesn’t change due to their coat color.

The exception would be if a white Lab turns out to be an albino.

Albinism is a result of a genetic defect that produces white skin and fur, red eyes and pink noses in a dog.

By checking the color of your white Lab’s eyes and nose, you can tell whether he’s an albino or not.

Although they’re the same breed, they have different builds to coincide with their purpose.

At one point, the English Lab was bred more for show, while its American counterpart was bred for work.

As a result, the English white Lab tends to have broader shoulders, a wider head with a more filled face, a slimmer neck and shorter legs than its American counterpart.

It also has a straighter tail and thicker coat.

A Lab’s temperament and disposition can be influenced by the way it’s raised.

As show dogs, English Labs often displayed a calmer temperament which could have been attributed to their upbringing.

In contrast, American Labs were energetic and lively, perhaps due to their working lifestyle.

Both lines, however, are  capable of being trained as service dogs and both have the potential to make great canine companions.

Yellow Labs may vary in color from pale white to cream colored to reddish-brown.

They generally come with hazel or brown eyes and black pigmentation around their eyes, nose and mouth.

When Labradors were first bred in the early 1800s, the predominant color was black.

Yellow Labs were seen as an inferior dog and often culled after birth, reducing the size of this gene pool.

Today, yellow Labs are extremely popular as family pets and are used extensively in movies and TV programs, for advertising purposes due to their photogenic qualities and as work/service dogs.

Yellow Labs may be at the forefront of the public’s eye, but in actuality, color has no bearing on a Lab’s character or personality.

All Labs have the potential to be of service in society today, regardless of their color.

A high intelligence level combined with an eagerness to please make Labradors a valuable resource in fields like search and rescue, drug and bomb detection, therapeutic assistance, assistance for the disabled and other important services.

Regardless of their color, Labs possess the type of traits that make them wonderful canine companions.

They’re loyal, friendly, affectionate and smart, which makes them easy to train for different tasks.

They’re gentle enough to be around children and energetic enough to keep up with a teen or adult’s active lifestyle.

If you’re the adventurous type, a Labrador makes a great companion for your hiking, biking, rollerblading or water play adventures.

Labradors can be very protective of their family, but they don’t necessarily make good guard dogs due to their over-friendly nature.

They’re a joy to have around due to their affectionate nature and enjoy being with people they love.

Over the years, there have been claims of personality differences in Labradors due to their color, but these claims have never been substantiated by scientific evidence.

A Lab’s training and upbringing, however, may make a difference in his temperament and disposition.

A dog that’s been loved and well cared for, for example, may have a sweeter disposition than one who’s been treated harshly or neglected.

In general, however, Labradors are bred with certain character traits, regardless of color.

Healthwise, recent studies revealed that chocolate Labs were at greater risk of developing ear and skin infections and having shorter lifespans than their yellow or white Lab counterparts.

Which Lab is Best for You?

When it comes to choosing the right Lab for you, it all comes down to personal preference.

In essence, all Labs are the same.

If you’re getting a purebred Lab pup, working with a reputable breeder will ensure you obtain a high quality, healthy dog.

Color-wise, however, they’re all good!

The gene that influences a Lab’s color doesn’t determine its character traits or skills.

Your input, however, can have a positive influence over your pup’s personality and temperament through his upbringing.

By providing opportunities for training, you can help develop your pup’s abilities and skills.

By feeding your pup a healthy diet and giving him plenty of exercise, you can help him grow into a healthy, happy dog.

By giving him love and attention, you can win his loyalty and trust.

The best Lab for you is one that loves you.