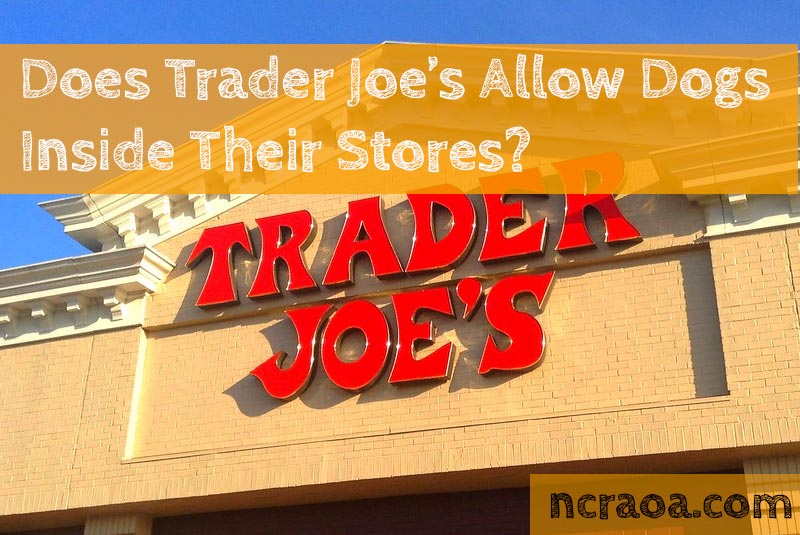 Most dog owners are not allowed to bring their dogs into stores, especially the stores that sell food. As a sanitation issue, stores that deal with edibles and foods for consumption do not allow animals in the store, unless under exceptional circumstances.

Stores have been increasingly adjusting their policies regarding dogs to be more dog friendly, and Trader Joe’s is said to be one of these stores.

Grocery stores are basically not dog friendly because of the guidelines of Federal and local regulations such as the FDA (Food and Drug Administration) involving food safety.

There are no straightforward rules guiding dog policy in Trader Joe’s, but the below is some insight on the Trader Joe’s stores’ position regarding dogs.

Trader Joe’s welcomes service animals to the store, but as the store is a grocery store, some state rules regarding what is allowed into the store’s space apply.

There have been complaints regarding the customers who bring on their dogs to the grocery store hidden in reusable grocery bags and others straight up walk in with dogs on leashes.

Despite the store welcoming service dogs to the store, people take advantage and bring in what they claim to be a service dog then play ball with the dogs till they get all frisky and jump on shoppers.

This does not appeal to especially people with disabilities, who need these service dogs in Trader Joe’s stores. When these people genuinely need to come in with a service dog, the store owner becomes leery of welcoming them in and of being helpful.

Unlike support dogs who are considered pets, service dogs are let in places that have no-pet policies. This is because the store or business is limited by ADA laws and prohibited from separating the dog handlers from their dogs.

A lot of people are taking advantage of “support animals” being allowed into stores such as Trader Joe’s to carry their dogs along when they don’t really need to.

Trader Joe’s has a no pet policy, but the store allows service dogs to ensure compliance with the ADA law.

At Trader Joe’s, if a service dog disrupts the other shoppers’ peace by barking and growling, the store manager is allowed to ask questions to ensure eligibility of the service dog.

There is no mechanism provided by the law to help determine the legitimacy of a service dog, and as interfering with the rights of a disabled person is considered a misdemeanor punishable by fine, Trader’s Joe’s is less likely to question people with dogs in the premises.

When it comes to the state laws’ official dog policy in stores, emotional support dogs are not covered under the Americans With Disabilities Act, so they might not be allowed in all locations of Trader Joe’s. However, the Act covers service dogs that aid with psychiatric disorders.

Does It Vary By Location?

Trader Joe’s had more than five hundred stores nationwide by April 2020, and 42 states, including in Washington, DC. All these Trader Joe’s locations are open to service dogs in the stores, although some disparities exist regarding a service dog’s definition and understanding.

Most people are not okay with the idea of having a dog around as you shop for foodstuff.

At one of Trader Joe’s stores in Fort Lauderdale, there was an incident if a woman who sidled in with a dog. The small dog was on a leash but in the pretense of a service dog.

Animals in grocery stores are considered to be one of the biggest retail peeves, mostly when the so-called “service dogs” don’t behave as service dogs do.

There are other trained service dogs that guide people with disabilities, such as the blind. These dogs are allowed in Trader Joe’s stores in all locations because they are considered a legal and humane necessity.

Some people claim to need their dogs to help with things like anxiety. These dogs are referred to as emotional support animals, and they are not allowed inside Trader Joe’s stores.

Why Service Dogs Are Allowed In Trader Joe’s

Many stores consider it a sanitation issue to have pets, especially dogs in food stores. Trader Joe’s, being a food store, has a strict policy that allows only service dogs into the premises.

Service dogs are specially trained to relieve themselves even in public without disrupting or being a nuisance to other people. These animals are also trained to help their handlers manage their disability and psychiatric issues.

READ  Can Dogs Eat Cream Cheese? Is It Bad For Them?

Service dogs are meant to help people who need them, so if allowed to go in Trader Joe’s with a dog, ensure that your dog will not bark and jump on others.