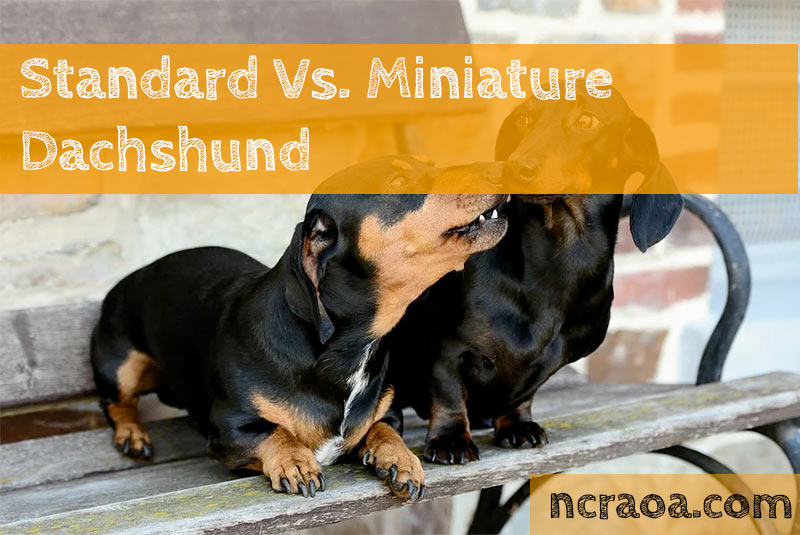 Even people who don’t like dogs cannot help but fall in love with a dachshund when they see one. They are just cool dogs.

Besides the fact that they are adorable, they have a personality all their own. Some people know how to pronounce the word dachshund. Many don’t. A lot of them just say “wiener dog.”

Regardless, the dachshund, pronounced (daak•snd), is one of the most loved animals in existence, so whether you call it a “doxie”, a “teckel”, a “wiener dog”, a “sausage dog”, a dachshund, or something else, call it a prize of a dog.

Are you contemplating getting a dachshund and cannot decide whether to get a standard dachshund or a miniature dachshund. Here are all the facts you need to help you decide.

The Breeding History of the Standard Dachshund Versus the Miniature Dachshund

Where Did the Standard Dachshund Originate?

Standard dachshunds originated in Germany and can be traced back to the 15th century.

How and for What Purpose Was the Standard Dachshund Bred?

The standard dachshund was bred first. He was purposely bred with the chondrodysplasia (dwarfism) gene, giving him stumpy, short legs like no other dog.

He was bred to have paws like a paddle and a pointed muzzle so he could dig down and flush out the badgers and other burrow-dwellers for the hunters. The name dachshund translates dachs “badger” and hund “hound” leaving dachshund or “badger hound”.

He was bred to have extra-sharp teeth located at the frontmost part of his mouth. He was bred with a super-strong jaw so that he could grip his prey like a vice.

This way, he could grab a badger or another burrow-dweller and drag it out of the den backward.

He has a nose that is shrewd and sensitive. This made him a wonderful dog for the hunt.

How and Why Was the Miniature Dachshund Bred?

Still, hunters were in need of a smaller dog to help flush out rabbits and such. They cross-bred standard dachshunds with breeds like pinschers and terriers.

Note: Though dachshunds are called badger hounds, they were also used by hunters to shake the bushes and help find wild boar.

The Appearance of the Standard Dachshund Versus the Miniature Dachshund

The standard dachshund can weigh as few as 16 or as many as 32 pounds. Miniature dachshunds weigh under 11 pounds, as a rule, so they are quite a bit smaller.

Unlike the American Kennel Club, the German Dachshund Club uses the dachshund’s chest circumference as its standard, with a standard dachshund measuring 35 or more centimeters, a miniature measuring from 30-35 centimeters, and rabbit dachshunds measuring up to 30 centimeters around.

Without looking at the family line, the parents, and even the grandparents, if available, it can be difficult to know exactly how large your dachshund will grow.

Dachshunds do not reach adulthood and thus, their adult height and weight until they are around 1 year old.

Note #1: There is actually a third type of dachshund called a “toy,” “teacup,” or “rabbit” dachshund that weighs under 8 pounds and grows only about 5 inches tall.

Note #2: There is also an unrecognized type of dachshund many refer to as a ‘tweenie’ dog. It is called this because it falls between the standard and miniature category weights, between 11 and 16 pounds.

The Looks of Dachshunds

Dachshunds are muscularly robust. Their skin is elastic and pliable without excessive wrinkling.

Though they were dwarfed, they do not appear awkward, nor crippled, but carry themselves proudly and confidently.

Their facial expressions are charismatic and smart. Uniformly, their head tapers all the way to the tip of the nose.

Their eyes are quite dark and shaped like almonds.

The Coats of Dachshunds

The smooth coat has a velvety feel to it. It shines in beauty, and it is a joy to pet and stroke a dachshund with a smooth coat.

The wire-haired coat has a rough feel to it but it is a pleasurable experience and not a bad one. This coat is quite waterproof.

They have goatees and bushy eyebrows. Known for their facial expressions, they are dogs with a big personality.

The long-haired coat has a sleek feel to it. It is wavy and flowy.

Longer on the neck, chest, body, and behind the legs, a long-haired dachshund’s coat is also longer on the ears, making it appear that the dachshund has hair, like a person.

The Colors of Dachshunds

According to the DCA (Dachshund Club of America), Member of the AKC (American Kennel Club) since 1895, the following are the self colors or solid colors in dachshunds:

The Patterns of Dachshunds

According to the DCA, the following patterns can be found in dachshunds:

According to the DCA, a pattern can be superimposed on top of any self, or solid, colors in dachshunds. The pattern is preceded by the color in the name, like cream piebald.

The Temperament of the Standard Dachshund Versus the Miniature Dachshund

Dachshunds with long-haired coats tend to be more laid-back than the rest, and here, there is no difference in the sizes.

READ  How Long Is A Chihuahua Pregnant For? (Months & Days Calendar)

The wire-haired dachshunds, in some cases, have been said to be the clowns, the monkeys of the bunch.

Dachshunds are lively, brave, courageous, and happy as a rule.

They can, however, be stubborn if they get irritated. They can also bark a lot.

They can be aggressive toward strangers, so, as with any dog, if you buy a dog that has not been trained, have him trained before you take him home. It will be so worth it in the long run.

Dachshunds can sometimes bey away at night, as well. You may want to look into finding out if your prospective dog does this, and again, have your dog trained.

The Cost of the Standard Dachshund Versus the Miniature Dachshund

Miniature dachshunds are more expensive right now, only because they are more sought after. They are the “in” thing. They are trendy and everyone wants one.

Another reason is due to the fact that litter sizes are generally smaller in miniature dogs. Other factors include whether the dog has been registered and vaccinated.

You will want to use a breeder who is reputable; however, they always have a waiting list, and their services to cost more.

The Health of the Standard Dachshund Versus the Miniature Dachshund

Good health in many dog breeds was sacrificed when natural selection took a back seat to breeders’ aesthetic fancies. The great news is that you can expect both varieties of dachshunds to live between 12 and 16 years if they are healthy.

Both standard and miniature dachshunds suffer from hereditary issues, some of them due to the way they were bred in reference to their stature versus length.

Let us examine some of the possible health issues hereditary in dachshunds.

Dachshunds are in the top ten dogs at risk for obesity.

Obesity can cause arthritis in dachshunds, and they may need osteoarthritis medicine three years earlier than dogs that are trim.

Because there is so much obesity in dachshunds, back issues are a real problem. Because their bodies are so long, there is nothing in the middle to support all that extra weight. 25 percent of dachshunds end up with back problems.

The dwarfism gene causes early degeneration of the intervertebral discs or IVDD (Intervertebral Disk Disease). The disks and vertebrae get brittle and the injury is similar to a human’s ruptured or slipped disk.

These spinal injuries can progress to the point of paralysis.

When you lift your dog, support his front and back (don’t just lift him from behind his front legs) as it will put pressure on his spine.

Because the dachshund’s teeth were bred to be so close together, they are crowded and tend to trap food, which leads to tartar.

Keep your dog’s teeth clean, because the inflammation and infection that can result from this can cause him to lose his teeth and worse.

When the adrenal glands make too much cortisone, that is Cushing’s disease. It’s a hormone imbalance that develops slowly.

Because of this, it can be mistaken simply for signs of aging.

If you see these symptoms, see your vet for evaluation. It is treatable.

This comes with a particular risk of getting squamous cell carcinoma and mast cell tumors.

Check your dog’s skin for lumps when you play with him.

It is not at all unusual for Dachshunds to be plagued with one of several neurologic disorders, like epilepsy, narcolepsy, or Lafora disease.

It shows itself like quick jerks of one or more muscles lasting up to a couple of seconds. It looks kind of like a shock.

While any dachshund can get it, miniature wire-haired dachshunds seem to be the ones who are prone to it. Twenty percent of them can get it.

If you notice these symptoms, have your dachshund looked at by a vet right away.

Your dachshund’s eye redness and inflammation can be simply from dry eyes or getting the wrong germ in his eye, or they could be a symptom of an underlying disease.

Symptom: A thin, cloudy lining on the lens of the eyes or a milky look over the eyes

If left untreated, cataracts will eventually lead to blindness.

This problem is seen most often in the miniature long-haired breed of dachshunds.

Eye ulcers can be healed if they are dealt with immediately.

While Glaucoma cannot be cured, its progression rate can be slowed.

There are other problems that seem to be prevalent in dachshunds, like DMVD (Degenerative Mitral Valve Disease), immune system disorders, liver disease, and more.

Just keep a close eye on your best friend, and most of these problems are treatable.

You may never have these problems or others with your dog. Just get a vet the day you bring him home and watch him well.

As with any breed of dog, dachshunds must stay on a good exercise regimen. Of the utmost importance, though, is their diet. Dachshunds, whether they be standard or miniature, must not be overfed.

Feeding your dachshund high-quality food and only the recommended portion of it is a huge factor in stretching those years out as long as possible.

Low-quality food is made up of more junk and is more fattening.

The Decision Between the Standard Dachshund and the Miniature Dachshund?

Only you can decide. Happy hunting!