Any pet owner can attest to how heartwarming it is to have your dog look at you with such love in their eyes.

Those same eyes that can melt even your strongest resolve and bend to their will as soon as they give you their powerful puppy looks.

However, it is also those same eyes that are at risk of contracting cataracts, especially as they advance in age.

Yes, even dogs get this condition, which is why it’s crucial that you try to help prevent this from happening as much as possible.

Sometimes, however, it simply cannot be helped because of genetics, which is why it is advisable to get your pet insured as early as possible before any problems come up.

Having pet insurance helps ensure that they will be able to get the proper medical treatment they need, as soon as they need it, and without as much damage to your pockets.

Cataract is the condition that causes cloudiness to the eye lens, impacting the quality of vision.

Left untreated, this could eventually lead to partial, and then ultimately complete, blindness.

There are various causes of cataracts, but the most common in dogs is that it’s hereditary.

As with humans, it’s also possible to contract cataracts as a side-effect of sugar diabetes, or diabetes mellitus.

Is it possible for your dog to get cataracts even though these two instances do not apply to them?

The answer is yes, cataracts can still occur spontaneously on your dog, or simply develop inevitably because of old age.

It can also be brought about by infections or injuries.

Also keep in mind that some dog breeds are more susceptible to developing cataracts than others.

To name a few, there’s the Labrador Retriever, American Cocker Spaniel, Boston Terrier, and French Poodle, among many others.

What this means, therefore, is that you cannot be complacent when it comes to your dog’s eye health.

How quickly and how severe the condition spreads depends on the risk factors present in your dog.

Cataracts in dogs could either be static or progressive, depending on their overall health condition.

There are four levels of cataract progression: incipient, immature, mature, and hypermature.

The incipient type of cataract means that its presence is very minor, taking up less than 15% of the lens.

This means that there is not much impact, if at all, to the vision’s quality.

Immature cataracts, meanwhile, involve over 15% of the lens, and may impact several layers of the lens.

At this stage, visual deficits can already be seen easily during examination, but are still typically mild.

A mature cataract, however, has more significant visual defects, and can already result in some degree of blindness.

The worst type would be the hypermature cataract, wherein the lens capsule becomes wrinkled, and the lens itself begins to shrink.

If you think your pet is a candidate for future cataracts, it would be good to keep a keen eye out for any possible symptoms.

This may include unusual changes in their eye pupil’s size or shape, as well as color.

Of course, the most obvious symptom of a cataract is the formation of clouds in their pupils.

However, your dog’s behavior can actually give you signs about their condition as well.

If you find them constantly or frequently rubbing their eyes, it might be indicative of their discomfort from not being able to see clearly.

They might be rubbing their eyes to take out the cloudiness they’re seeing.

They could also begin to be more hesitant with their movements.

Whereas before, they would freely and constantly jump on surfaces, like the couch, now you might see them trying to move with a bit more care and reluctance.

Unfortunately, there is still no way to prevent the progression of cataract once it develops in your dog.

And as this is potentially something genetic, it limits a lot of options on how to deal with it once and for all.

It would be nice to have topical medications to relieve the symptoms and actually delay, if not stop altogether, the progression of the condition, but that’s still not a possibility at this point.

The good news, however, is that it is possible to remove the cataracts altogether, so as to restore your dog’s quality of vision to perfection.

You will have to work very closely with your veterinarian for this, in order for you to determine if it is the best course of action for your dog’s condition.

While they may give the recommendation immediately upon thoroughly examining your dog, it’s also possible that they would still refer the case to a veterinary ophthalmologist, if only to confirm the condition of your dog.

If the condition is still salvageable, then they can undergo the surgery to remove the cataract and have their vision completely restored to full functionality.

Recovery shouldn’t take too long as well, barring any complications or side-effects from the surgery.

In fact, they could already be out and about, back in their favorite parks, after only a couple of days following the surgery.

While it’s great to know that your dog has a real shot at getting their carefree, cataract-free life back with a simple surgery, here’s where it gets dicey, especially for you, owner.

This means that it could certainly reach more, depending on their urgency and the case’s complexity.

That’s why it’s best that you sign up for pet insurance as soon as possible. 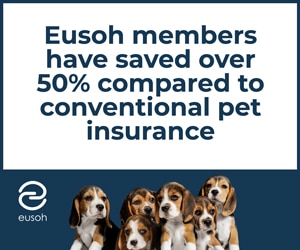 Just make sure to choose the right policy that will be able to cater to this particular medical need for your dog.

If you wait until late, you might not be able to get insurance coverage, especially if it is a pre-existing condition.

Sign your dog up for pet insurance before any of their symptoms occur, so that they can have a shot at the best possible medical care when they need it.