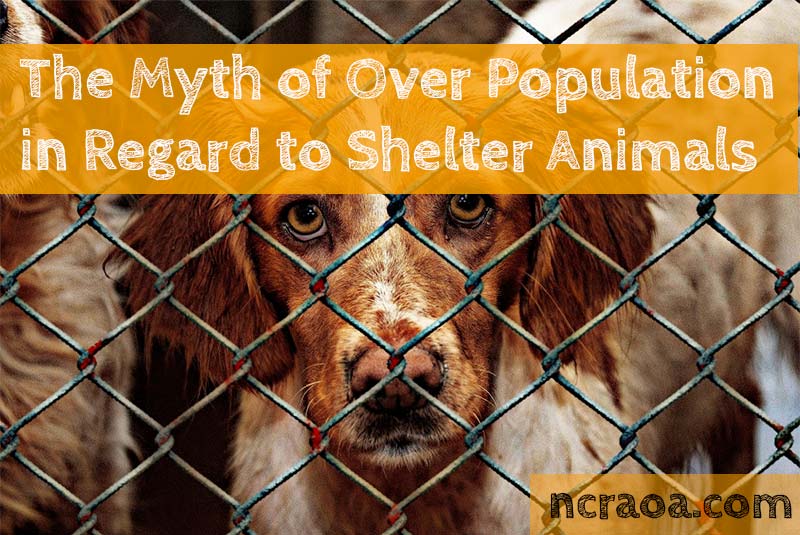 There are dogs, puppies, cats and kittens killed every week in this country’s animal shelters. These deaths are a sad and inexcusable fact.

To listen to the media reports, the number of animals in shelters is all the fault of dogs/cats being bred. If you breed, then more will be killed in shelters. If you buy a dog or cat then you are supporting breeders and one more will die in a shelter.

The animal rights movement promotes that breeders are evil. To allow your dog/cat to reproduce makes you lower than dirt. Heaven forbid if you actually planned the event.

Wanting to purchase a pet with a certain look, behavior and wanting it for a specific purpose makes you a bad person. According to the media and animal rights activists, over population (breeding) is the reason for all of the shelter deaths.

A large portion of the general public has been lead to believe these theories. These are only theories because reliable, credible statistics have not and are not being kept at an overwhelming majority of shelters as to why animals are being surrendered.

There are some sections of this country that are importing dogs from foreign countries because of a lack of local dogs available for adoption. Large numbers in shelters seem to be regional not necessarily national.

Because of the media and animal rights movements there are numerous counties throughout this country that are requiring mandatory neutering or spaying of ALL dogs and cats in private homes as well as those in shelters. I do feel that all animals adopted from shelters should be neutered or spayed.

The only way to be allowed to keep an intact animal (whether you breed or not) is to pay outrageous yearly breeding or kennel fees. This applies to Granny’s little poodle who is never allowed out without Granny, to breeders trying to improve their breed, to breeders striving to save a rare breed from extinction, to hunters and their hunting dogs.

Some areas have already passed laws requiring mandatory neutering and spaying of all privately owned animals.

My main question has always been — Why are there dogs and cats at animal shelters in the first place?

I completely agree with Officer Hartley.

If the owners of those animals surrendered at shelters would accept responsibility for those animals then the shelter would not have to deal with the numbers that have to be killed. Those numbers would not then be deceptively used to impact the lives of responsible animal owners through animal rights backed mandatory neuter spay and breed specific legislation.

Breed specific legislation is another whole can of worms!

Just a quick note: there is a huge difference between animal rights and animal welfare. Animals don’t have rights; people do, in my opinion. But, people do have responsibilities towards animals.

Animal rights activists generally believe that humans should not use animals in any way. That includes having pets (slavery is their term), for food, research or any other use or association. There should be no domestic animals.

Animal welfare is where people feel responsibility to care for, use and live with animals humanely. Please be sure of the agendas (often hidden) of those organizations you choose to support. Some of the animal rights groups have been determined to be domestic terrorists by the FBI.

These existing laws need to be enforced before new laws are written. If your animal isn’t allowed to roam it will not be randomly breeding, bothering your neighbor, their property or livestock.

Roaming dogs, whether in a pack or a single, can frighten people, fight with other dogs, kill livestock or other dogs or cats, injure people and destroy property. It isn’t the dogs or cats fault, they are just being who they are, but it is sure the fault of their owner.

Ever wonder what happened to that dog or cat of yours that never came home? If lucky, it did end up at the shelter. Maybe it was smeared across a road somewhere or left to die in a ditch.

Or perhaps someone initiated the three S’s – shoot, shovel and shut-up. Again, not the animals fault but definitely the fault of the owner.

Did your dog or cat have babies that you want to take to the shelter? Have you tried to find them homes? Run ads? Ask friends or neighbors if they want a new pet? Taking them to the shelter should be your last option not your first choice.

The shelter has enough to do without irresponsible owners contributing to the problems. Is your pet sick or old? Does it cost too much to care for it? Did your kids grow up and now you just don’t want the thing?

Did you take on more than you can handle? Did you make the wrong breed choice? Do you work 60 hours a week and don’t have time? Did the animal’s owner die and it ended up at a shelter? Does it have behavior problems?

Did it pee on the floor; again? Did it jump on the kids? Or does it bark all night? Did it get too big? Turn out to be the wrong color or shed?

These are but some of the reasons why animals end up being abandoned or surrendered to shelters. While some situations are legitimate reasons for surrender, they are the exception not the rule. A shelter should be the considered only after you have exhausted all other paths.

Most of the reasons for surrender seem to cluster around behavior/training issues, lack of animal care knowledge and owners not knowing what the resources are available that can help. Of course, you will still have a certain segment of people who just don’t give a dang.

For those people who are at a loss of which direction to turn, there are people out there that can help. This is where a call to your local shelter should be one of your first moves. Shelter staffs are often a wealth of information.

Often they can offer suggestions that may solve the very problem you are having. They usually are aware of trainers or instructors who will be able to help you with your problems. Local humane societies can often point you in proper directions.

Local training clubs and parks & recreation departments often have classes or trainers they can refer you to. Talk with your veterinarian. If you don’t have a vet then call around to the different offices.

There are numerous rescue groups available to assist in one way or another. You have to ask for the assistance. No one is going to know what you need if you don’t ask.

If you don’t accept the responsibility for seeking solutions to problems then you become just another irresponsible owner whose animal will, probably, eventually die an early death. Often at a shelter, often giving fuel to the myth that over population (breeding) is the sole reason for the numbers of animals in shelter.

Not only are you doing a disservice to yourself and your own animals, you have become a pawn in the animals rights agenda.

Permission granted to copy and distribute this article in its entirety as is.