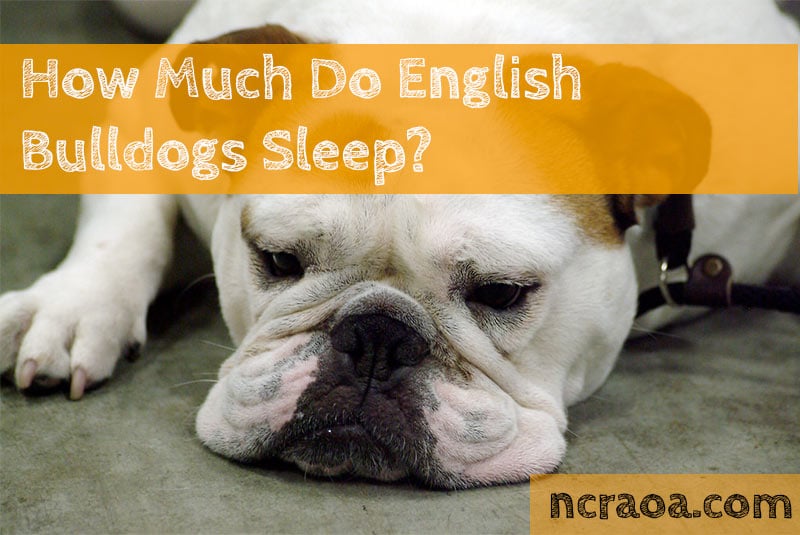 While all dogs need their sleep to help them recover both physically and mentally, English Bulldogs are the exception to the rule, needing more sleep than any other breed of dog.

Let’s examine the amount of sleep this cuddly breed requires and learn why this dog breed needs its beauty rest in order to stay healthy.

Contents show
Typical English Bulldog Sleep Patterns
Puppy (New Born to 6 Months)
Adult (7 Months to 6 Years)
Senior (7 Years and Older)
Why Do They Sleep So Much?
When Is It Too Much?

The amount of sleep an English Bulldog requires will largely be dictated by the animal’s age.

It takes a great deal of energy to grow and develop so getting a healthy amount of sleep is the perfect way to allow the body to recover.

As your dog ages and matures though the amount of sleep required each day will typically level off.

As a young puppy your dog will require the most amount of sleep compared to any other point in your pet’s life.  That is because it takes a great deal of energy to grow and develop into a strong, adult dog.

Expect an English Bulldog puppy to need anywhere from 18 to 20 hours of sleep per day.

Of course, a puppy is not going to sleep for 20 hours straight, but rather break up his or her sleep schedule into short naps.  Most puppies will sleep for about 30 minutes at a time to get a quick recharge.

If your puppy has had a big day, both physically or mentally, expect your puppy to be a little extra tired the following day to allow it to recover.

A good indicator that shows your puppy is growing up and reaching adulthood is the amount of sleep he or she will require in a day.  As your puppy ages, he or she will start to explore the world more and will slowly require less frequent naps to keep him or her fueled for an active day.

When your puppy can forego the frequent naps and spend more time socializing with you it’s a good sign that he or she is becoming an adult dog.

While this is a marked difference from the amount a puppy needs, it is still the most sleep required compared to any other dog breed.

True with many dog breeds, as your English Bulldog becomes older he or she will slow down and require a little more sleep than when he or she was a healthy adult.

A senior English Bulldog will usually need about 16 to 18 hours of sleep, which is more than half the day.

Just like a puppy, don’t expect your English Bulldog to sleep all in one chunk of time, but rather split his or her sleep cycles up into long naps throughout the day.

Senior dogs tend to move a little more slowly than a healthy adult, requiring more energy to perform simple tasks.  As the body starts to age it can take more energy to simply walk and move about.

This is completely normal for an aging dog, but may become more apparent with an English Bulldog since they require so much sleep to begin with.

Why Do They Sleep So Much?

While it is true that all dogs require sleep to help them recharge and recovery after physical and mental exertion, the English Bulldog is a special case, sometimes requiring more than half the day to feel fully rested and recovered.

There are a few reasons why this particular breed of dog needs so much sleep to stay healthy.

First, the physical structure of the English Bulldog does not lend itself to an energy efficient build.  With short leg, a barrel chest, and a compact face and nose, this dog is not built for physical exertion.

While a young English Bulldog will have energy to romp and play for a short while, this dog is better for short bursts of energy rather than sustain long efforts of physical exertion.

Further, the size of the English Bulldog will dictate how much sleep is required, with larger dogs often needing more sleep.

Secondly though, the temperament and nature of this dog also lends itself to being a solid snoozer.  With a calm demeanor, not easily excited, the English Bulldog is comfortable and confident with his or her surroundings.

This means that he or she should be friendly, calm, and will generally get along with other people, children, and pets.

With a calm and confident temperament, it is alright for a bulldog to sleep for large portions of the day, not easily excitable or overly energetic.

When Is It Too Much?

If you are thinking about owning an English Bulldog it is important to understand that this dog requires several hours of sleep each day in order to stay healthy.  However, when is it too much sleep?

Keep a close eye on your pet’s sleeping patterns.  If there is a distinct change in how much your pet sleeps it may be time to alert a veterinarian.

Suddenly going from an engaged and active dog, to one that sleeps for hours on end, suddenly can be a sign of a larger problem.

Alternatively, monitoring a dog that suddenly has an anxious demeanor with little sleep throughout the day can also indicate a larger issue.  Also keep a close eye on any accompany symptoms that may show up with changes in your pet’s sleeping pattern.

Be particularly mindful when monitoring how much your pet is eating and drinking, his or her interaction with other people and pets, and how your pet is moving to be aware of any concerning health signs and symptoms.

Knowing the baseline for your pet and what healthy behavior normally is will help you determine if a trip to the vet is in order.