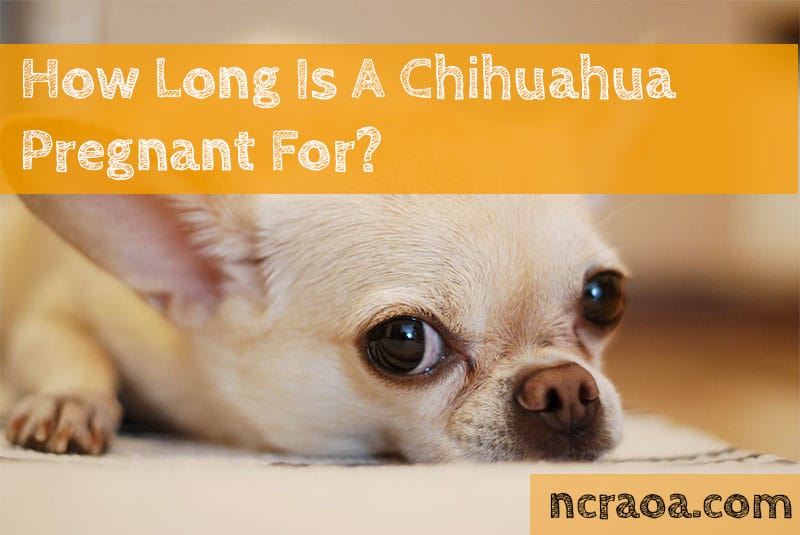 If you’re the new owner of a female Chihuahua, then you might be wondering about pregnancy in the breed. Well, you’ve come to the right place.

I grew up next door to a family that had Chihuahuas all throughout my youth, and I saw a lot of little puppies being born over there. Though sometimes their Chihuahuas needed to have a C-section to give birth to the litter.

We are going to review the length of your Chihuahua’s pregnancy, which is between 58 – 62 days on average. Then we’ll take a week-by-week look at what to expect, and finally, we’ll review some tips about when your dog is in heat.

Pregnancy Length for a Chihuahua

Similar to other dog breeds, the length of pregnancy for Chihuahuas is between 58 and 68 days. This translates to about 2 months’ worth of pregnancy, or a gestation period and pregnancy of around 63 days on average.

It might seem strange that Chihuahua’s share the same pregnancy length as St. Bernards, given their size differences –  but that’s just how dog biology works. With that being said, what should you expect from week to week?

Let’s take a look at the expected pregnancy calendar for a Chihuahua.

Most people won’t even realize their dog is pregnant yet.

They might have some morning sickness, but that’s it.

At this point, your dog’s embryo starts developing and moves to the uterus.

Beyond that, there are few signs of pregnancy since the fetus is very small at this point.

We’re at about the halfway point of her pregnancy. This is the week that a vet will be able to feel the puppies moving around inside of mom.

Week four also starts when you should be careful around your dog. The end of week four is when there’s the highest risk of miscarriage.

At this point forward, you should limit exercise and consider adding nutrients to her diet.

This week you can have your vet perform an ultrasound, so you know how many puppies to expect.

The fetuses will grow into more recognizable dog figures – they’ll have formed claws and paws this week.

At this point, your little Chihuahua will be not-so-little. The pregnancy will be really noticeable thanks to the rapid growth of the fetuses between weeks five and six.

On top of that, your dog will have an increased appetite and accompanying weight gain.

During this week you should strategize and find a safe area that your dog will ultimately give birth.

Make her comfortable in this area and help her recognize that this is her nesting area.

Now, the puppies inside of mom will look like miniature Chihuahuas.

They are almost fully formed, and you’re a couple of weeks away from birth!

Your Chihuahua will start instinctively building her nest this week. She’ll prepare the safe area that you showed her during week six.

During week eight, you might even see puppies moving around her belly!

For some Chihuahuas, this will be the week they give birth.

The final week of pregnancy for most Chihuahuas. During week nine, the pregnant dog will make the final preparations to get ready to give birth.

She will be very lethargic and act strangely during this week leading up to birth.

Before, after, and between pregnancies, your chihuahua will go into heat. Let’s learn more about heat in your dog.

How Often Do Chihuahuas Go Into Heat?

Your Chihuahua will go into heat once they are sexually mature. Unlike humans, your dog will continue their menstruation and heat cycle until they pass away.

Later in life, their heat cycles will be further apart and they will have decreased fertility.

You can expect your Chihuahua to go into heat once every six months or so. For breeders, the best practice is to wait until the dog’s third heat.

Since Chihuahuas hit sexual maturity around 5-7 months old, that means that they shouldn’t be bred until they’re 23-25 months old – right around two years old.

Heat Length in a Chihuahua

For most Chihuahuas, the heat cycle is about 3 weeks.

During this time, they’ll go through different stages of heat.

There are three distinct stages of heat for your Chihuahua.

The first stage is the beginning of heat. Your Chihuahua’s vulva will look more swollen than normal.

You can also expect more frequent urination and perhaps bloody discharge from their vagina.

The previous stage was just the beginning of heat, it isn’t until stage two that your Chihuahua is ready to breed. Her vaginal discharge will change colors to brown or clear.

During this stage, you can consult with your vet if you want your dog to have puppies.

During the final stage of heat, your dog won’t be interested in breeding anymore. Her vulva will go back to normal and the vaginal discharge will stop.

The end of this stage signifies the end of her heat cycle.

Signs of Heat in a Chihuahua

The good news is there are signs that indicate when your dog is started, going through, and finishing their heat cycle.

During the first stage, you’ll notice your dog’s tail is tucked which shows her uninterest in breeding. She will also be grooming herself a lot more often.

Likewise, during stage two her tail will be skewed to the side at a strange angle.

On top of that, your dog will have changes in their appetite from week to week.

Another sign that your dog is in heat is to observe other dogs around her. Male dogs will interact with her differently and their behavior will shift.

There’s a strange phenomenon that happens to Chihuahuas after their heat cycle. Even if they aren’t pregnant, sometimes their brain is convinced that they are.

After a heat cycle, your dog might be lethargic, depressed, restless, or lose their appetite. These are all signs of pregnancy, but they can happen even with these false pregnancies.

These symptoms typically go away within a month, so they shouldn’t lead to concern. Just be careful in case they are accompanied with other symptoms due to an unrelated problem.

Tips to Dealing with a Chihuahua’s Heat Cycle

There are a few things to keep in mind while your dog goes through her heat cycles.

Now you know the basics of your Chihuahua’s pregnancy. Use the pregnancy calendar to help you during the process, and the tips about her heat cycle to keep her safe otherwise.