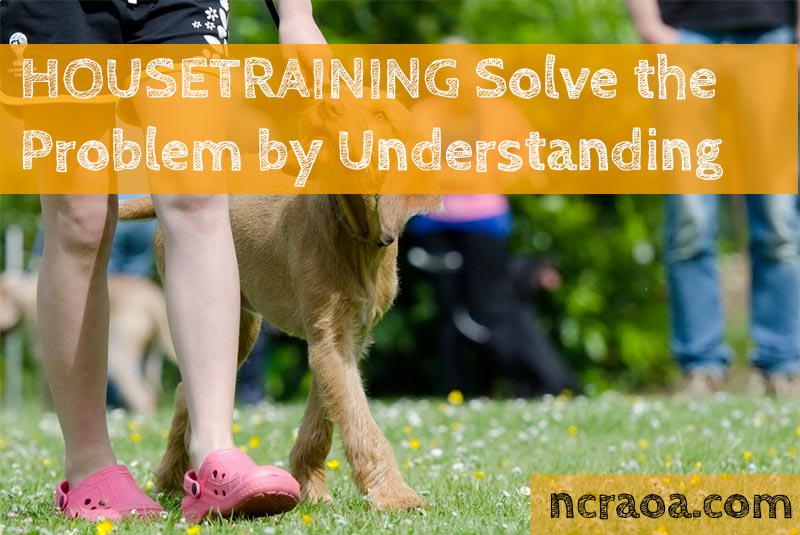 Understanding the problems associated with housetraining is a wonderful way for owners to understand other canine behavior problems. Some misguided folk still try to control behavior problems with punishment in a hopeless attempt to curtail the dog’s hebavior altogether.

“Corking the volcano” attempts at controlling behavior seldom work. On the contrary, punishment exacerbates many problems, since it forces the dog to misbehave at times when it cannot be punished, like when the owner is away. What is disturbing, though, is the lack of foresight-the sheer inhumane silliness-of inviting a dog to share our home and then punishing it for acting like a dog.

When it comes to housesoiling, it must be obvious that one simply cannot say to a dog, “No more elimination.” I mean, what’s the dog to do?

Its irrepressible need to eliminate quickly impresses on most owners the need to teach the dog where it should eliminate; to acknowledge that elimination is a normal, natural and necessary canine behavior and, rather than trying to cork the dog and forbid it from eliminating altogether, the solution is to teach the dog how to perform its toilet duties in a manner that is acceptable and appropriate for domestic living.

Most people acknowledge that housesoiling is a spatial problem: The dog is eliminating in the wrong place. So what’s the problem? Just show the dog the right place to eliminate and reward it for doing so.

In just three days to a week this adult dog is housetrained; moreover, it now wants to eliminate in its dogy toilet, since soiling the house does not have comparable fringe benefits.

You might think at least some of the above is sound advice, but one vital piece of information is missing. In addition to being a spatial problem, housesoiling is also a temporal problem.

The temporal nature of housetraining creates two common scenarios: [1] Either the dog is in the wrong place at the right time (the dog was left in the house with a filling bladder and/or rectum while the owner went to work, hence the dog was forced to soil the house), or [2] The dog is in the right place at the wrong time (the dog was taken to its doggy toilet or walked by the owner, but its bladder and rectum were empty because it had already eliminated in the living room when the owner was at work).

Before getting angry with the dog (and, heaven forbid, punishing it when we arrive home), perhaps we should consider first, who exactly, is at fault, and second, why we don’t just housetrain the dog?

Then there will be no further cause for frustration and hypertension. The owner must take full responsibility for the dog’s actions and train the dog.

Being in the wrong place at the right time may easily be prevented by confining the dog to an appropriate are when it is left alone for lengthy periods. Surely, common sense dictates that if a dog is not fully housetrained, it would be folly to let it have unsupervised access to any part of the house for even a minute, let alone all day.

When the dog is left at home alone, it would be smart to confine it to a small area, such as an outdoor run or a single room indoors (the kitchen or utility room), so that if the dog eliminates, it will do little damage and, therefore, not upset the owner.

If you don’t have a yard or a kitchen, or if you live in a small studio apartment with wall-to-wall carpeting on the 27th floor, then improvise. Build a smaller playpen for the puppy/dog with a dog bed in one corner and a doggy toilet in the other.

Take up the carpet or, in the dog’s playpen, cover the carpet with several layers of plastic sheet and put a piece of tough linoleum on top.

For a doggy toilet, use sheets of newspaper or a litter box. However, if you want the dog to eliminate outside eventually, it is helpful to use outside items like soil in the litter box or a couple of concrete pavement slabs-perhaps even a roll of turf.

This is passive training. By the time the pup is old enough to be walked outdoors, it will have already developed a strong substrate preference for eliminating on concrete and soil.

The primary purpose of long-term confinement is to confine the problem. The owner acknowledges the puppy/dog will probably need to eliminate sometime during the long period it is left alone, so it is best if feces and urine are deposited only in the doggy toilet of the long-term confinement area and not all over the house.

(Obviously a dog crate is not a suitable place to confine an unhousetrained dog for long periods of time, otherwise it will be forced to soil its crate. Once the dog has developed the habit of crate-soiling, this messy problem will frequently recur and render the crate a useless housetraining tool).

If the owner only knew when the dog wanted to relieve itself, housetraining would be a non-problem. The owner would simply show the dog the appropriate spot and praise and reward the dog for using it. Unfortunately, most owners cannot predict the dog’s needs and, consequently, waste a lot of time walking empty dogs.

What novice dog owners need is a foolproof, time-efficient, user-friendly means to predict when the dog wants to eliminate. Simple. Closely confining the dog to a small space just large enough for it to comfortably lie down strongly inhibits the dog from eliminating, because it does not want to soil its bed.

However, during this period of confinement, both bladder and rectum progressively fill, making it highly likely the dog will want to eliminate immediately upon release from confinement. Since the owner chooses when to release the dog, the owner is choosing when the dog will eliminate.

To implement the houstraining program, confine the dog to a small area, for example a dog create, basket or bed, and every hour on the hour, take it to its toilet area and give it three minutes to eliminate. If it does, praise it enthusiastically and maybe offer a couple of food treats into the bargain.

Since the dog is now empty, it may be allowed to have the run of the house-as long as someone is still keeping an eye on it so it does not get into other mischief. If the dog does not eliminate during the allotted three-minute toilet break, no big deal, just put it back in the crate for another hour, and so on.

Occasionally, the two housesoiling problems are compounded. Not only does the dog soil the house, but it also refuses to eliminate on walks. This really annoys owners. It is not actually uncommon for a dog to fail to eliminate on a walk-regardless of the encouragement, pleading and prayers from its owner-but to do so immediately upon returning home.

Basically, there are three reasons why the dog would do this. [1] The dog would much rather eliminate at home, in private; [2] The dog has learned that its walk will end as soon as its feces hit the ground; and [3] The dog dare not eliminate in the presence of the owner.

That many dogs develop an early preference for eliminating on carpets, indoors, underscores the importance of never letting the puppy/dog make a single mistake during its first two weeks at home. Just one mistake is the start of a habit-a bad habit.

Why do you think the dog does not want to eliminate with the owner around? Is it shy? No. Look in the mirror; there’s your problem.

During the early stages of the housetraining fiasco, the little dog was peacefully relieving itself in an out-of-the-way corner of the living room when suddenly the owner screamed, “Arrgghhh! & *#%*!! NOOOOO!!!!!” and with the speed of greased lightning, grabbed the defenseless critter in mid-poop and…..you know the rest.

This reprimand was not what one would call instructive.

Rather than learning that it should not eliminate in the living room, the dog learned that it would be foolish to eliminate at all in the owner’s presence. The owner tried to cork the volcano. The dog must eliminate; if it dares not do it while the owner is there, it will wait until the owner is gone.

Dr. Dunbar is a veterinarian, animal behaviorist,
and dog trainer based in Berkeley, California.