German shepherds are beautiful dogs that make a valuable contribution to society, whether as work dogs, service dogs or family companions.

They’re smart, loyal, dependable and highly trainable to suit most any need.

It’s no wonder these dogs are so popular and favored above other breeds.

But what if you can’t find a purebred German shepherd or you’re interested in a look-alike with similar personality traits and temperament?

You’re in luck! There are quite a few dog breeds similar to German shepherds to choose from.

If you’re in the market for a German shepherd look-alike, here are 10 different breeds to consider: 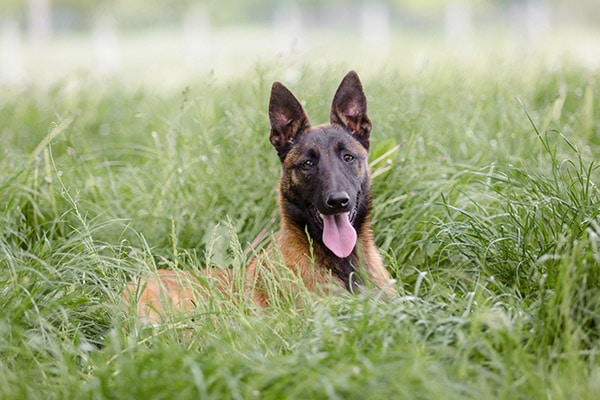 Many people mistake the Malinois for a German shepherd due to their amazing similarity in appearance.

If you look closely, however, you can see that the Malinois is smaller than a shepherd and has shorter, fawn-colored fur as compared to a shepherd’s black and tan coloring.

Like the German shepherd, the Malinois is intelligent, eager to learn, a hard worker and can be trained to obey advanced commands.

These high-energy dogs require constant stimulation to keep them engaged and happy.

Otherwise, they could resort to destructive behavior to burn off steam.

The time spent working and training with a Malinois will establish a tight-knit bond between you and your pup, making him a more integral part of your family.

Carpathian shepherd dogs hail from the Carpathian Mountains in Europe.

They were originally bred for guarding livestock but make good family guardians and companions as well.

Once they’ve developed a bond with their family, they’re protective and loyal.

Carpathian shepherds are similar in physique to German shepherds, with some noteworthy differences.

The Carpathian shepherd is larger in size, weighing in at over 100 pounds.

It also has a thicker coat, floppy ears and a milder temperament than its German shepherd counterpart. 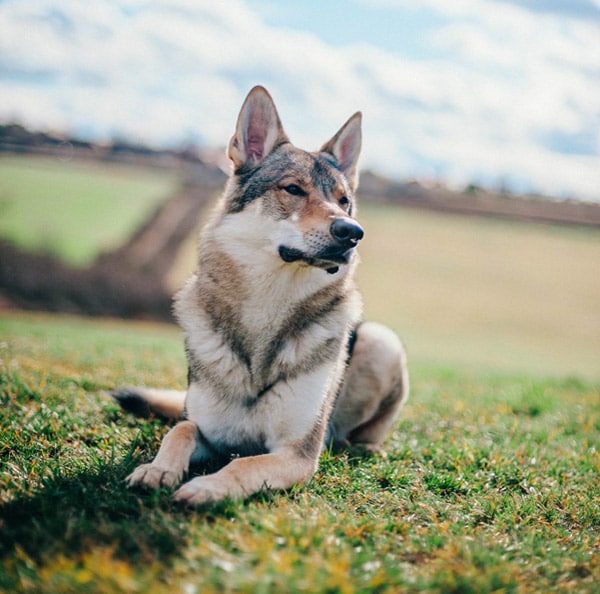 The Tamaskan is a crossbreed between a Husky, a Malamute, a Czechoslovakian Wolfdog and a German shepherd.

It was designed to have a wolf appearance, with the disposition of a dog.

Although rare at one time, since its recognition as an official breed in 2013, Tamaskans have become more common in the dog world.

When it comes to personality, Tamaskans share many of the same traits as a German shepherd.

Despite its fierce, wolf-like appearance, the Tamaskan has a gentle disposition that’s accepting of children and other dogs, making it a good candidate for a family pet.

Once it has established a bond with its human family, the Tamaskan makes a loyal, affectionate companion.

In fact, Tamaskans prefer to be with people as opposed to being alone.

Daily input in the form of exercise and mental stimulation will keep this pup healthy and happy in his new home. 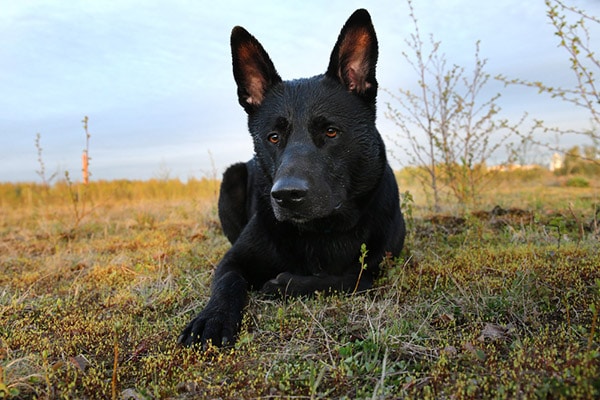 Bred for herding sheep and farm work, the Dutch shepherd is yet another breed that resembles a German shepherd dog.

This athletic, independent breed is tough, agile and highly energetic, requiring strenuous exercise daily to keep it occupied and happy.

Although Dutchies have been around for quite some time, having been bred in the early 1800s in the Netherlands, they’re just now experiencing greater popularity as a family dog.

Through socialization from the time they’re small, these dogs can easily adapt to family life.

Appearance wise, the Dutch shepherd differs from a German shepherd in size (he’s smaller), the shape of his head (wedge-shape) and his color (only in brindle).

Once socialized, both breeds are protective and affectionate with their human family.

Whereas the Dutch shepherd is more inclusive in his affections for the entire family, a German shepherd tends to gear his affection more toward his primary caregiver.

The Byelorussian, aka Eastern European Shepherd, came to being by mixing German shepherds with Russian breeds like the Laika and Ovcharkas.

In mixing these dogs, Russian breeders sought to produce an improved version of the original German shepherd dog.

Besides size, two other differences in appearance are the Byelorussian’s thicker coat and limited color options.

Byelorussians were bred to be fearless, confident, alert and strong-nerved.

In Russia, they were used primarily as military, police and guardian dogs due to their speed, endurance and agility.

These dogs are also known for being loyal and devoted to their owners.

For the most part, they’re one-person dogs, developing a strong bond with their main caregiver and ignoring others, even if they’re raised in a family environment. 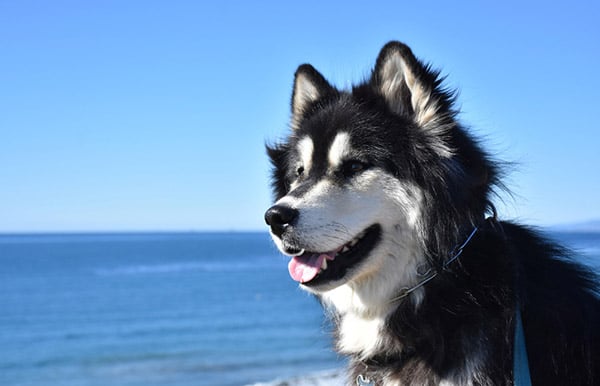 The Alaskan Malamute can best be described as a work horse, bred for hauling heavy loads through harsh arctic terrain.

This explains their strength, agility and muscular physique.

Like German shepherds, this breed has energy to burn and needs a daily outlet for this energy so they don’t get bored and resort to destructive behavior.

Malamutes make good family dogs as they tend to retain their “inner puppy” as they age.

They take great pleasure in romping outdoors and playing with their human family.

They’re extremely friendly dogs – as much with strangers as their family – which makes them poor guardians.

They’re good with children but should be supervised with little ones as their roughhousing could cause an accident. 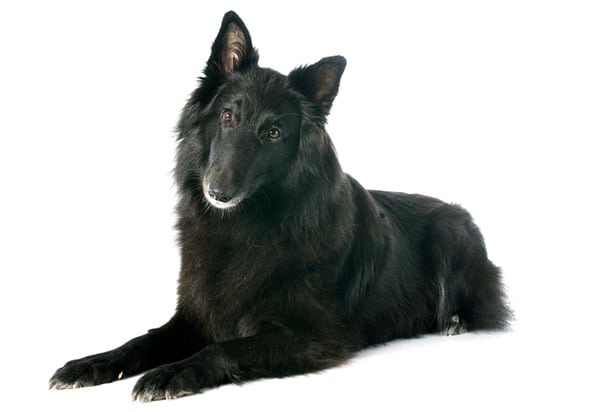 The Groenendael (Belgium Sheepdog) has its origins in Belgium.

It’s one of four Belgium sheep dogs coming from this region.

People often confuse this breed with the long-haired German shepherd dog due to similarities in size and build.

The Groenendael, however, is lighter boned and has a more refined head and squarer profile.

The most striking physical aspect of a Groenendael is its long, luxurious, black coat, which gives this breed an elegant appearance.

Groenendaels are known for being shy, bright, protective dogs.

With extensive socialization, they can overcome their shyness and learn to enjoy the company of people and other dogs.

Their eagerness to please makes training easy, enabling this breed to be used as police, guard and therapy dogs in addition to being a family pet or companion.

When raised in a family environment from puppyhood, Groenendaels have the potential to be great family dogs.

They bond well with people and suffer from separation anxiety when left on their own for any length of time. 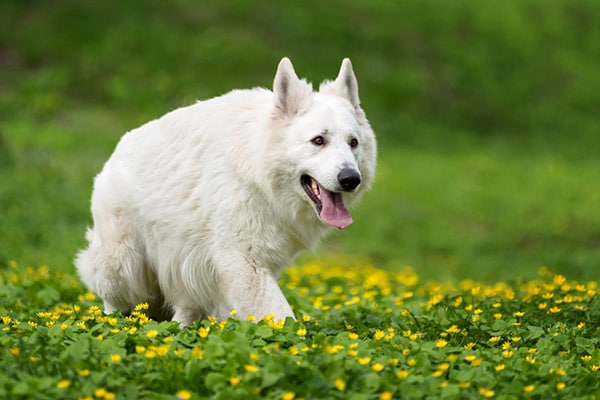 The Berger Blanc Suisse is distinguished by its beautiful white coat, a mellow disposition and friendly nature.

Unlike most other shepherds that are high-energy dogs, the Berger Blanc has a calmer temperament that doesn’t require a lot of activity to control.

Their gentile nature and patience make them a good choice for children.

This breed also tends to be less suspicious of strangers and other pets.

The Berger Blanc Suisse is an alert, agile dog, known for its ability to compete and excel in canine sports competitions.

If you want to cut it really close when it comes to German shepherd look-alikes, the Bohemian shepherd may be the pup for you.

This breed features the trademark black/tan coat colors of a German shepherd as well as its dark brown eyes, but is smaller in stature.

The Bohemian shepherd also has its own unique personality.

The Bohemian shepherd goes way back to the 14th century when it was bred for herding sheep and guarding.

Today, these dogs are trained in search and rescue or used as service or therapy dogs.

They also compete in canine sports competitions. Many enjoy a relaxing family life.

Bohemian shepherds are bright and lively dogs that need to be challenged daily to avoid boredom.

A bored Bohemian shepherd is a recipe for disaster.

An active outdoor lifestyle will keep your Bohemian shepherd pup out of trouble. 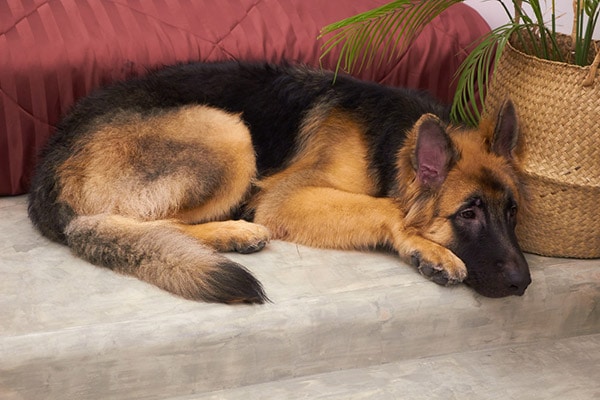 It’s easy to mistake a King Shepherd for its German shepherd counterpart from afar.

Once you get up close, however, you’ll clearly see the difference.

This breed wasn’t named King Shepherd for nothing.

These dogs grow to be massive in size, standing up to 30 inches tall and weighing as much as 150 pounds.

The King Shepherd is believed to be a hybrid mix of the Great Pyrenees, the Akita and the Malamute.

It’s stronger and heftier than a German shepherd, yet has a calm and gentle temperament.

In fact, it’s been referred to as a “gentle giant.”

Like German shepherds, the King Shepherd is intelligent, eager to please and protective.

Its sheer size is intimidating enough to keep trespassers off your property.

German shepherds and their look-alikes have a lot to offer in the way of companionship, protection and love to anyone willing to open their hearts and homes to one of these canine pups.