Tug of war is one of the top exercises for dogs and is a great way to entertain them physically and mentally.

But why does your dog love this game?

Is there something more in-depth at play here beyond mere fun?

As with all things dog, there is, of course, something fascinating to learn about your dog’s love of tug of war.

So here’s why your pup can’t get enough of this game.

Contents show
Teamwork: Tug of War is Great for Socialization
Strengthening Their Jaws: Important for Hunting Purposes
Feels Similar to Hunting: Another Important Lesson to Learn
Great Exercise: Burns Off Excess Energy
Teeth Cleaning: An Important Instinctive Desire
Should You Encourage This Game?

Teamwork: Tug of War is Great for Socialization

Your dog is a pack animal and uses play as a way to learn many lessons.

For example, they chase each other for exercise and learn how to track and hunt down various prey animals.

Just as importantly, they use tug of war as a way to strengthen bonds with each other.

It takes two willing parties to play tug of war, including either two dogs or one dog and a playful owner.

As a result, your dog often comes with you to play tug of war when they feel a need to be closer with you.

Few other games provide them with the kind of exhilarating connection that they get when they play this way.

Just pay attention to their eyes when you play: they’ll constantly look at you to make eye contact.

Encourage this connection by getting on the ground with them and making it easier to lock eyes. 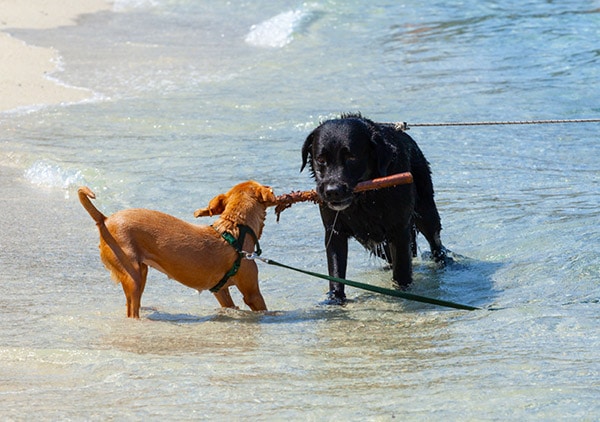 Dogs naturally have very strong jaws that bite down on prey during a hint to shake the life out of them.

However, they also need to exercise their jaw to make it stronger and minimize any strength loss.

That’s where tug of war becomes so helpful.

Dogs instinctively know that they need to exercise their jaw and get an incredible workout for it by tugging on a rope with you or another pack member.

It is vital to know, though, that older dogs may also experience tooth loss in heavy games of tug and war.

A missing tooth or two won’t bother a dog too much: in fact, dog jaws are so strong that they can usually eat food even without teeth.

However, that doesn’t mean you should encourage tooth loss and should do what you can to protect older dogs from this problem.

Feels Similar to Hunting: Another Important Lesson to Learn

The next time you play tug of war with your pup, you might find yourself a little concerned because this game is so similar to a successful hunt for a dog.

Just think about their behaviors when you finally let go of the toy and let them have it.

Do they shake their heads rapidly several times and then try to open up the surface of the toy?

And do they pull out stuffing or squeak it rapidly as they play?

Well, these behaviors are not just the cute actions of a quirky pet.

Instead, they are indications of its past evolutionary history as an apex predator.

A dog shaking its toy is an attempt to break its neck, as if it were an animal.

And opening it up to remove stuffing is an effort to disembowel or prepare it for easier eating.

As for your dog’s love of a squeak, this sound emulates the frightened noise of a dying animal.

In essence, your dog is exercising its basic prey drive whenever they play tug of war.

That thought may seem concerning, but it is completely healthy and normal for your dog to behave this way.

Your dog has a lot of energy: that’s one of the best things about owning a pet!

They continually find new ways of engaging with and entertaining you and are a constant delight.

However, that excess energy can be challenging for many pups to handle and may push them to destructive behaviors otherwise.

That said, your dog would rather please you and behave appropriately and often turn to tug of war to burn energy.

Doing so helps to keep them out of trouble as well.

There are few exercises that test them quite as much as this fun activity.

They’ll constantly be pulling against you, trying to get every edge that they can.

They’ll be mentally engaged as they try to think of new ways to tear away the toy.

And they’ll engage with you emotionally, as well, creating a fun level of connection that other games do not.

In this way, your pup can burn both excess mental and physical energy with ease.

And for anxious dogs, this is often a great option.

Do you know why your dog loves chewing on hard objects so much?

There are many reasons for this love, but many of them are an intuitive way of caring for their teeth.

For example, gnawing a bone helps to strengthen and clean their teeth.

And the same thing is true of tug of war games.

This fact is particularly true for modern tugging games, as much newer tug of war toys feature fibers that help to floss a dog’s teeth and break apart grime and plaque.

However, your pup’s clever instinctive mind understands that this behavior helps to keep their teeth strong.

It is incredible how well animals learn to take care of themselves simply by following their gut instinctive desires!

Should You Encourage This Game?

Some dog owners may worry that tug of war teaches their pup to be dominant or aggressive with them or others.

Those fears are understandable but not accurate.

Go to any zoo, and you’ll find wolf or coyote pups playing tug of war together and having a great time.

The same is true when you play with them.

The only concern here is to make sure you minimize extreme tug of war games with older dogs to avoid hurting them.