Dogs often have many curious or strange behaviors that baffle owners or even frustrate them.

For example, some owners may find that their dog seems practically obsessed with following them into the bathroom.

So why is your dog following you during your most private times?

Usually, they have a reason that makes sense to them but may be confusing to you without a bit of explanation first.

Contents show
Pack Behavior: Your Pup Needs Social Time
Protective Behaviors: Your Dog is Watching Your Back
Curiosity: What are You Doing?
Gauging Your Health: Metaphorically Sniffing Your Butt
Fear and Anxiety: Not Uncommon With Many Pups
Boredom: They Need Something to Do
Should You Worry About This Behavior?

While humans think of their visits to the bathroom as particularly private, dogs don’t have the same perception.

Has your dog ever looked to you while they “go” in the yard or even have troubles “going” when you’re not there?

That’s because they are inherently social creatures who love nearly constant companionship.

And they likely need this connection even when you’re sitting in the bathroom, doing your business.

In fact, locking your dog out of the bathroom while you “go” may cause anxiety and make them follow you even more often.

So it’s understandable if you have a hard time relaxing in the bathroom while your dog stares at you.

However, they are trying to build a strong pack bond with you.

Sometimes, all it takes is a pat on the head or a scratch behind the ears to get your dog to leave the bathroom while you use it. 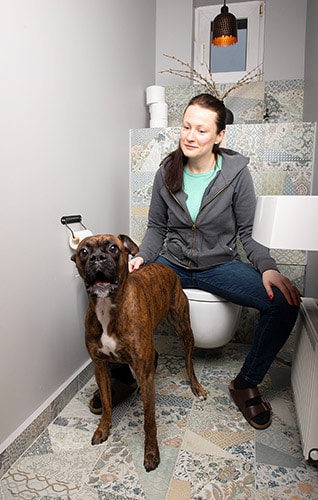 Protective Behaviors: Your Dog is Watching Your Back

In the wild, animals are often at their most potentially endangered when they are urinating or defecating.

This problem is particularly true when they poop.

Simply put, they’ll be a little distracted and may not notice other animals sneak up on them.

As a result, pack creatures like wolves and coyotes often watch out for danger as their pack members urinate or defecate to keep them safe.

And your dachshund or husky is nothing less than a tiny wolf or coyote in their mind.

So, as a result, your dog might follow you to the bathroom to keep you safe from non-existent predators.

When imagined in this light, this behavior is not only cute but kind of touching.

So let your pup stand guard over you, and you’ll also make them feel like a more important and vital member of their pack.

Curiosity: What are You Doing?

Dogs have a naturally high level of curiosity and learn through investigation and interaction with their environment.

Their curiosity is exceptionally high around their pack mates: they want to know what everyone is doing at every moment to ensure that the pack is safe.

This type of instinctive behavior likely causes your dog to follow you everywhere, including the bathroom.

And from a dog’s perspective, a bathroom is a very confusing area.

There are no comfortable places for them to sit, no toys or food, and you do nothing but sit in them for a few moments before you leave.

So, as a result, dogs often have an innate fascination with the bathroom even when you’re not in there.

Beyond that, they also smell what you’re doing and often feel inspired to check out these odors.

Do you know why dogs sniff other animals behinds?

It’s not because they’re weird or depraved.

Instead, they are gauging the animal’s health.

Animal experts have discovered that dogs can not only measure what other animals ate recently but can even get an idea of their overall health.

Some can even detect which pack members are sick and use this information to care for them as needed.

Well, your dog cannot sniff your butt when it would like because you’re usually wearing underwear, pants, and other clothes.

As a result, they may follow you to the bathroom to sniff your fecal matter odor.

Remember: their noses are much stronger than yours and can detect things you cannot.

They may even be able to tell if you’re getting sick before you do, simply by the odor of your waste.

Fear and Anxiety: Not Uncommon With Many Pups

While your dog may be attempting to watch your back when you go to the bathroom, another impulse may also be at play here.

Simply put, your dog may look to you as the alpha of the pack and follow you for protection. You often notice this type of behavior from naturally anxious dogs or those who cling tightly to you. Small dogs mainly display this kind of behavior.

And locking them out of the bathroom will cause them even more anxiety and worsen the situation.

Unfortunately, there isn’t much you can do here but indulge your pup.

Hopefully, over time, you can teach them that they have nothing to fear by letting you go to the bathroom alone.

Unfortunately, however, dogs often have high levels of innate and learned behaviors that are not particularly easy to reverse.

Boredom: They Need Something to Do

Dogs love being entertained and often find a simple change in scenery is more than enough entertainment.

Case in point: they may follow you to the bathroom just to do something different.

While that might not seem exciting to you, dogs are much easier to entertain than humans.

To be fairer to a dog, they’re also more heavily stimulated by changes in scenery than people.

So the new smells, sights, and sounds they experience while moving through the home are often very stimulating and will keep them from getting too bored throughout the day.

Should You Worry About This Behavior?

Your dog following you to the bathroom is mostly a harmless show of affection that helps them socialize more deeply with you.

Therefore, it is usually not harmful to indulge them and let them hang out with you while you go.

The only concern here is if they have high levels of separation anxiety that are so intense that they can’t let you out of their sight while you go to the restroom.

Talk to your vet if this is the case.