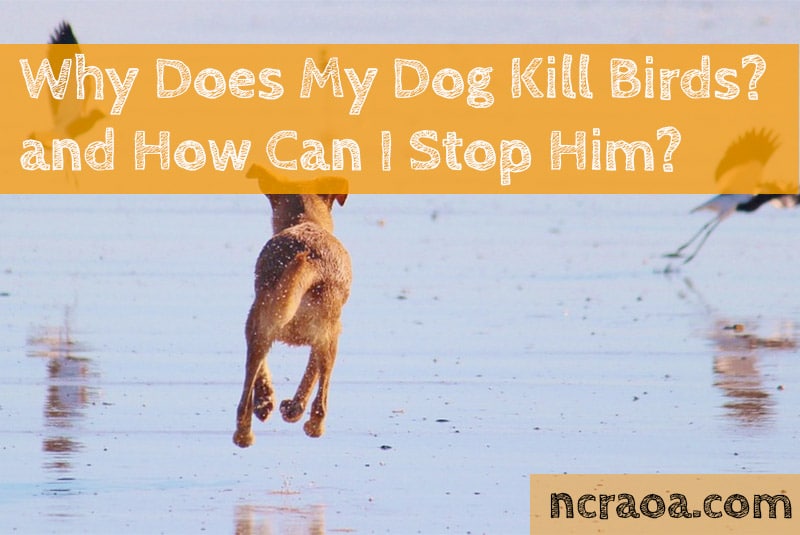 Although not as skilled as cats in chasing and killing birds, some dogs get a kick out of bird hunting.

And they occasionally get lucky especially with water birds, wild baby birds, and poultry.

But, why do dogs kill birds? They can’t help it because it’s hardwired into their DNA.

Keep reading to learn more on why dogs kill birds, how to stop it, and if they can get sick from eating a dead bird.

Contents show
Why Do Some Dogs Kill Birds?
It’s in Their DNA
They Kill to Impress their ‘Pack’
They Kill for Attention
They Kill Due to Dietary or Hunger Issues
What Happens When Your Dog Eats a Bird? Will He Get Sick?
How to Stop Your Dog Killing Birds
Train your Dog
How to Bird Train Your Dog
Hang a Bell on the Dog’s Collar
Give your dog attention and engage them in a lot of physical activities.
Use Distractions
Use a leash
Choose the Right Dog Walking Routes

Why Do Some Dogs Kill Birds?

It’s in Their DNA

Our furry friends are likely descendants of wolves that were domesticated tens of thousands of years ago. So the ancestors of the modern pup hunted small animals like birds and mice.

Today, even though most dogs don’t need prey on birds to survive, they still instinctively derive great pleasure from chasing, attacking, and even killing birds and other small animals.

Anything that flutters around fascinates them.

This prey instinct comes into play when dogs are playing fetch. Dogs’ need to chase the ball during fetch is tied to the adrenaline rush they’d have gotten from running after small prey like birds.

Fetch simply taps into an instinctive behavior ingrained in dogs’ genes. Besides, some breeds were refined precisely for bird hunting.

For instance, the Labrador Retriever was bred for waterfowl/duck hunting. And, South Carolina hunters originally bred the Boykin Spaniel for hunting and stalking wild turkeys.

In a nutshell, dogs have a prey drive. You can’t wipe out the drive, but you can manage it.

They Kill to Impress their ‘Pack’

Another theory on why dogs prey on birds is that the act hacks back to when they were pack animals.

In the wild, dogs lived in packs with a clear hierarchy. Today, your family is essentially your dog’s pack, and you’re the pack leader.

So when your dog goes out, mauls birds, and brings them back to you, it’s trying to prove its usefulness to the pack through its ability to hunt and provide.

READ  Does Hobby Lobby Allow Dogs Inside? Is It Dog-Friendly? (2020 Store Pet Policy)

They Kill for Attention

Most dogs love attention and excited reactions. So they may exhibit negative behavior to attract attention.

For instance, if your dog shows up with a dead bird and this leads the squeals of excitement or panic, they might do that again.

The over-excited reaction is like part of play, they get a major kick out of it.

So, each time they get a manic reaction, your dog will likely show up with another bird to keep the game going.

They Kill Due to Dietary or Hunger Issues

If the quantity of food you feed your dog isn’t enough to satiate them, they’ll resort to preying on small animals like birds to satisfy their appetite.

This is especially true for dogs that engage in a lot of physical activities and thus need more food. Hunting can be a way of them getting more calories.

Seek professional advice on the ideal diet for your dog.

What Happens When Your Dog Eats a Bird? Will He Get Sick?

Knowing that your dog kills and eats birds can be distressing, especially if you’re a bird lover. You might also wonder whether eating birds will affect your dog’s health negatively.

If your dog eats a bird, there is a good chance that they’ll be fine. Scavenging and eating small game has historically been part of dogs’ feeding habits, so they are well adapted to it.

However, eating wild game can cause serious health issues.

For one, some birds are carriers of salmonella and so your dog can become infected if it eats a bird that carries this microbe.

Salmonella may lead to gastroenteritis – your dog’s gastrointestinal tract will become inflamed. Salmonella can also be transmitted to humans.

Your dog can also suffer from garbage toxicosis if it eats a dead bird (or any other spoiled food) that’s infested with toxic microbes. It’s no different from food poisoning in humans.

There is also a chance that your dog may be infected with West Nile Virus. This virus, which triggers brain inflammation, is typically transmitted through mosquitoes.

But your dog can get infected if it eats an infected bird.

If you’re worried that your dog may have contracted an infection, here are the symptoms you should look out for:

READ  Can Dogs Eat Sunflower Seeds? Are They Bad For Them?

How to Stop Your Dog Killing Birds

Bird training, recall training, and “leave it” command training can help prevent your dog from chasing or hurting birds.

You should ideally start the training when they’re young, but even older dogs can be trained.

How to Bird Train Your Dog

Hang a Bell on the Dog’s Collar

This is a preventive method. You can thwart all of your dog’s bird hunting attempts by attaching a bell to their collar.

The bell will tip off the birds as soon as the dog starts to sneak on them.

A bell is also generally useful as it allows you to easily locate your dog.

Give your dog attention and engage them in a lot of physical activities.

A lot of negative behavior in dogs, like chasing and harming other animals, can be attributed to pent-up energy.

If a dog is adequately exercised and stimulated through long playtimes and walks, they likely won’t have the energy or inclination for chasing birds.

READ  Does Menards Allow Dogs Inside? Is It Dog-Friendly? (2020 Store Pet Policy)

Exercise and mental stimulation are especially key for dogs that have been bred for running like greyhounds and lurchers.

You can engage your dog by playing ball, Frisbee, and other games that replicate the act of chasing birds.

Dogs are drawn to birds largely due to their movement, and the excitement of chasing and eventually catching and killing them. It’s an instinctive impulse.

So you can divert the attention of a dog that’s about to chase birds using an activity that replicates the thrill of bird-chasing.

For instance, you can attach your dog’s favorite toy to a string and carry it around, you should then quickly call your dog whenever they attempt to chase birds, tag the toy behind you, and have the dog chase you instead.

This should be followed by a meat-based treat.

Keeping the dog on a leash, though not ideal, is an effective way of stopping dogs from killing birds. It’s the best you can do before your dog is bird trained.

This doesn’t mean that dog walks should restrictive and less fun.

You can use a retractable leash that allows your dog to run around and explore, and that allows you to adjust the length whenever you’re around birds.

It may not be possible for you to completely avoid birds, but, if your dog is a prolific bird hunter, you can opt to walk it at midday when birds aren’t very active, unlike at dusk or dawn.

If you have a day job, this may not be possible.

So you can walk your dog at any time of the day in pedestrian streets and industrialized areas and other places that birds typically avoid, and keep off parks and areas inhabited by wildlife.

You should avoid areas where ground-nesting birds breed, places with poultry, and around water birds (many of them are particularly vulnerable because they can’t take flight fast).

For instance, the beach is often inhabited by various ground-breeding birds, some of these birds are endangered.

If dogs keep invading the chicks and nests, the consequences will be devastating.

Hopefully, you have learned all you needed to know about why dogs eat birds and how you can prevent it. Remember, when in doubt, keep your dog on a leash.