Dog owners love to show their pets affection in familiar ways, and giving their furry friends kisses is one such way.

However, while we as humans may like kisses, do dogs even know what they are?

We often liken dogs licking us to their version of kissing, but with dogs, this gesture can mean much more than affection.

To help give you a better idea of whether or not your dog enjoys getting kisses, here is everything that you need to know.

Contents show
Why Do Dogs Lick?
Do Dogs Like Kisses?
Should You Give Your Dog Kisses?

Why Do Dogs Lick?

Firstly, let’s take a look at what many people consider to be the dog version of kissing.

While it may seem like your dog is giving you kisses when they lick your face, there is actually a lot more behind it.

Dogs lick for many reasons, one of which is communication.

It can communicate affection between people and other dogs and it can also be a form of greeting.

This can be why your dog often tries to lick you when you come back home after work.

When a dog licks, endorphins are released, which can make a dog feel happy, comforted, and less stressed.

In this way, it is similar to the human form of kissing.

However, kissing can also be a way for dogs to explore interesting scents or show submission.

If your dog kisses your face and you react positively, they will be more likely to continue doing it, and it could become a form of attention-seeking for them.

They could also lick your face if they are curious about something you’ve eaten recently or as a way to draw your attention towards a problem, such as if their bowl is empty.

Sometimes a dog may lick you if they feel threatened or intimidated by you, in a similar way to how they would lick a more dominant dog. 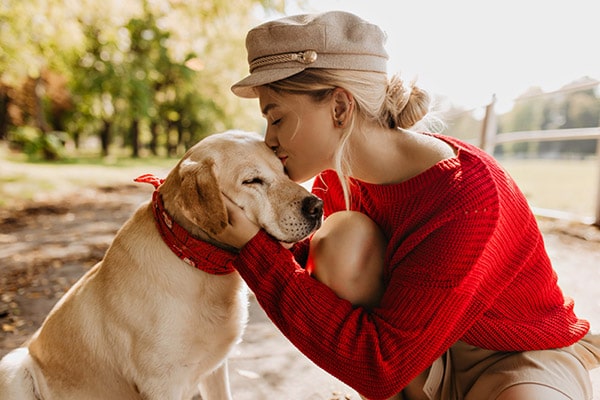 Although licking can be used to show affection or deference between dogs, the human version of kissing is something different.

Often, when we kiss our pets, we will put our faces very close to theirs, and in some instances, we may also hug them while giving them kisses.

While some dogs may tolerate this well, there are some things to keep in mind.

For instance, dogs often don’t approach each other head-on, and putting your face close to your dogs could be interpreted as assertive behavior.

If your dog isn’t used to this, it may feel threatened or even scared.

Over time, they can begin to associate this behavior with affection, although it is important to watch their reactions before you start cuddling them and giving them kisses.

Many dogs tolerate kisses because they have come to accept it as normal behavior from their owner, and something not to be afraid of or threatened by.

Others may find it uncomfortable no matter how much you try to get them used to it.

Just as some people aren’t fond of affection and cuddling, so are some dogs.

When giving kisses to your dog, you should always start slowly and watch their reactions carefully.

This is one of the best ways to see whether or not your dog is enjoying receiving this form of affection.

If your dog finds it stressful, it may try turning away, licking its lips, or even licking at your face to get you to back off.

If a dog enjoys kisses, they may wag their tails, lean into you, and appear happy and alert.

That being said, if you have young children who want to cuddle and kiss your dog, it’s important to supervise them and teach them how to do so safely.

Unfortunately, kids can be impulsive, and by grabbing a dog and approaching it quickly — especially if they’re eating — they can place themselves in danger.

Every year over 400,000 children are bitten by dogs in the United States, and most of these accidents happen at home to children younger than seven.

Even if your dog is gentle with your kids, approaching them the wrong way can cause them to lash out out of fear.

Should You Give Your Dog Kisses?

If you really want to show your dogs affection by giving them kisses, the first thing you’ll want to do is start slow and always monitor their behavior.

If your children want to give your pup kisses, always make sure that you are close by to guide them, and teach them about how to handle themselves and understand when to step away.

When it comes to giving your dogs kisses, it’s a good idea to play it safe and get to learn your dog’s unique personality so that you can better understand how they will react to this affectionate gesture.