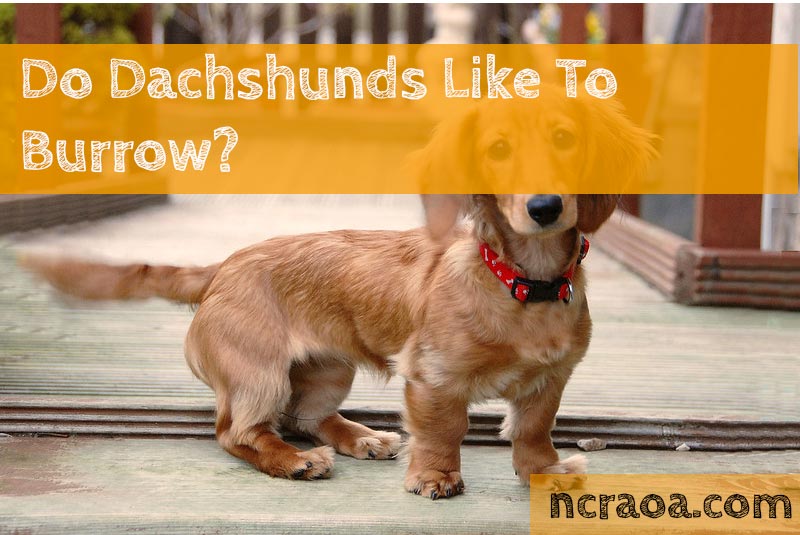 If you’re a new Dachshund owner, then you probably noticed that your new doggo spends a lot of time trying to get under your blanket or covers.

But that’s not what’s going on with your pup.

Dachshunds like to burrow. It’s just part of their evolutionary and genetic nature.

So, if you’ve been wondering if it’s normal for your Dachshund to burrow, then the answer is YES.

If you’ve never has a dog that behaves like this, then you might be wondering what’s going on with your Dachshund. As a breed, Dachshunds are “denning” animals that like to burrow.

For pet owners, this behavior is most commonly seen when your Dachshund burrows under a blanket or pillows.

If you have other pets in the the home, then you’ll probably even notice your Dachshund burrowing up next to them for sleeping.

And Dachshund puppies often burrow into your sleeves, if you’re wearing long sleeves when holding them.

Should I Let My Dachshund Burrow?

Can you stop your Dachshund from burrowing?

No, and you shouldn’t try to stop them. It’s part of their genetic makeup and just something that they do, which makes them feel safe.

READ  How To Get Your Dachshund To Stop Digging

Plus, it’s basically impossible to stop a Dachshund from burrowing since they are driven to do so by their genes.

At night, you’ll notice that it’s almost a regular ritual for your Dachshund to burrow for a bit before finally settling into that sleeping position.

Since Dachshunds are such a small breed, burrowing is also a bit of a safety mechanism for them. Whenever they feel scared or anxious, they can just burrow into a soft, comfortable place and feel safe and calm.

If you have any big changes in life, such as moving to a new home with your Dachshund or adding a new family member or pet to the home, then you’ll notice that the burrowing activity picks up a bit.

So, let him burrow but also try to let him know that it’s safe by sitting with him and talking in a soothing voice.

If you try to stop your Dachshund from burrowing, or try to limit the burrowing behavior, then it will not have good results for you or the dog. Your Dachshund will become agitated, aggressive, fatigued, and depressed.

The fact of that matter is that your Dachshund will always burrow and you just need to give him space to do so. You can optimize areas of your home for this, such as a pile of blankets or pillows.

Should I Ever Worry About My Dachshund Burrowing?

Though it is completely normal for your Dachshund to burrow, and to burrow a lot, there is such a thing as too much burrowing. So, if you’ve noticed some differing behavior that has you concerned, then you can always consult with your veternarian.

READ  Standard Vs. Miniature Dachshund: Is There Really A Difference?

Some behavioral changes to watch for:

If you notice any of the above, and it does not go away, then you might want to take your Dachshund to the vet to see if there is something to be concerned about.

Can My Dachshund Suffocate When Burrowing?

If you’re like me, then when you see your little Dachshund burrowing you worry about him being able to breath. If you’re also worried about suffocation, then I can tell you that there’s no reason to worry.

I spoke with my local vet and she assured me that Dachshunds are smart enough to come out of their den when they notice that they need more air.

As you can see, if you’ve got a Dachshund as a pet, then you’re just going to need to get used to their burrowing. Dachshunds are always going to burrow, whether you want them to or not.

So, optimized your home for their burrowing ways and just let them go at it. There’s nothing for you to worry about, unless you notice some behavior changes that last for a few days.