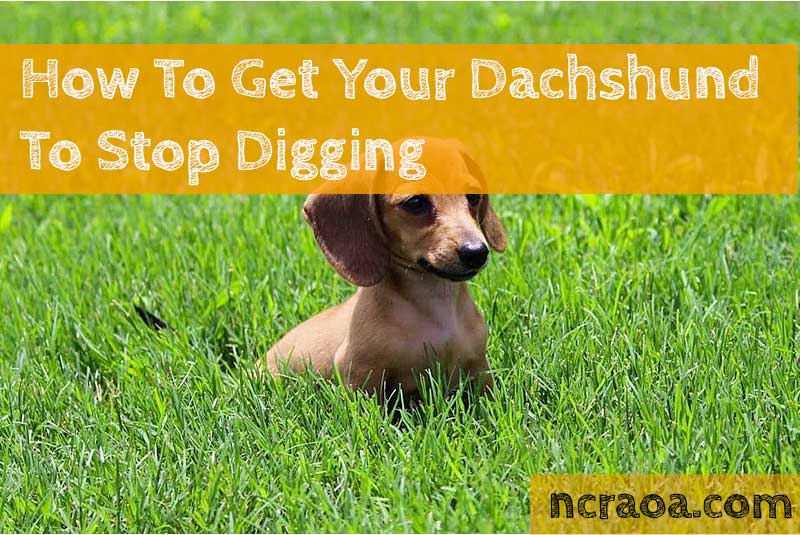 Destructive digging is a highly common problem for dog owners. If you own a Dachshund, you may be frustrated by the holes you find around your fence and flower beds.

Before you get angry with your dog, consider that Dachshunds were bred to have strong legs and long claws to hunt badgers.

Digging holes is what Dachshunds do, but consistent training can prevent this destructive behavior.

Why Is My Dog Digging?

Digging is in your Dachshund’s blood. Hybrids are also notoriously prone to digging, particularly the Beagle Dachshund mix and Terrier Dachshund mix.

Puppies are more likely to dig than adult dogs, but that doesn’t mean your Dachshund will grow out of his bad habit. Try these dog training tips to save your yard.

Walk your pup around the neighborhood every morning and afternoon. You should spend at least 60 minutes each day exercising your Dachshund by walking, jogging, and playing with toys.

Puzzle toys are superior to bones: your Dachshund is driven by instinct to hide his food, so that bone may be buried for later.

Dachshunds with separation anxiety may dig to keep themselves occupied. There are many reasons why your Dachshund can’t tolerate being home alone, none of which have anything to do with you being a bad dog owner.

READ  Do Dachshunds Like To Burrow? (Getting Under Your Blankets)

If your pet shows signs of separation anxiety, avoid leashing him outside for hours. This won’t condition him to overcome his fear! Instead, work with a certified separation anxiety trainer (CSAT) to prevent destructive digging.

The instinct to dig is strong in all Dachshunds, but Dachshund rescues may dig even more often due to trauma. If your dog comes from a difficult background, he may use digging for stress relief.

The longer your dog endured cruel living conditions, the more difficult it will be for him to acclimate to a normal environment. Here are a few ways you can help your Dachshund rescue feel at home:

Warming up your Dachshund to his surroundings takes time, forgiveness, and patience. Don’t be discouraged by setbacks.

If you catch your Dachshund digging, use training methods that avoid reinforcing your destructive behavior. (Pro tip: shouting “No!” won’t help.)

The smell of citrus repels dogs and dampens other scents that may trigger digging.

4. Keep Your Dachshund Warm in Winter

Puppies and tiny dogs like Dachshunds are especially prone to digging during the winter months because they have less body fat than big dogs. Keep your Dachshund warm with sweaters and dog booties.

You can also try creating an outdoor enclosure or placing a small space heater where your dog sleeps.

5. Use Rose Trimmings or Chicken Wire

If you’ve exhausted all other methods to get your Dachshund to stop digging, try chicken wire or rose trimmings.

Line the underside of your fence with chicken wire or throwing rose trimmings in your Dachshund’s favorite digging spots.

6. Make Your Dachshund His Own Digging Area

By their very nature, Dachshunds love to dig and that’s just they way that it is. While you can deter them from digging up your flower bed or your garden, you might want to indulge them a bit.

So, consider building a digging area just for your Dachshund. It will help him satisfy his natural instincts and it will keep you happy cause you know he won’t be digging up your yard or garden.

When you’re ready to build a digging pen for your Dachshund, make sure that you fill it with sand so that it lets him know where his digging area ends and where the forbidden yard begins.

And go ahead and bury some toys for him to dig up when he’s out there – he’ll love it.

Will My Dachshund Grow Out Of Digging?

As you might expect, Dachshund puppies are more boisterous than older dogs and they are more prone to frequent digging.

As your Dachshund ages, it will calm down some and did less frequently than it did as a puppy.

Will Neutering Stop My Dachshund Digging?

If you’re looking for a way to put a damper on the behavior, then neutering the dog might be on your list of possibilities. But will it stop your dog from digging?

Yes, it will stop it somewhat, or at least make it less of a problem.

After neutering your Dachshund, you’ll notice that he is generally calmer than usual, which means he won’t dig as much.

Another benefit of neutering your Dachshund is that he won’t go out roaming in search of female, which means he won’t keep trying to dig his way under the fence to follow a scent.

There are many reasons why Dachshunds dig. Even if you train your Dachshund out of his destructive digging habit, don’t be surprised if you find a hole by your fence every so often.

Dachshund owners must accept that this breed is simply more prone to digging than others; they don’t dig holes out of spite.

The bottom line: no pet is perfect, so appreciate the joy your Dachshund brings to your life.