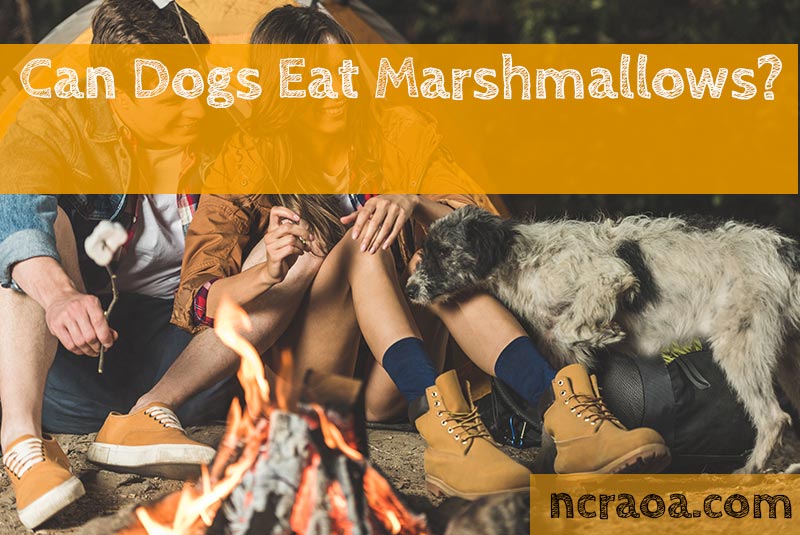 It’s very tempting to want to share your favorite human treats and snacks with your dog. If you’re sitting around the fire pit enjoying a night outside toasting s’mores you know you can’t let your pup nibble on the chocolate.

But what about those ooey-gooey marshmallows? Are they safe for your four-legged friend? No, dogs can’t have marshmallows, though if your pup sneaks one that you’ve dropped it probably won’t hurt him unless the marshmallow has xylitol as an ingredient.

Not all marshmallows are toxic for dogs but they are never a healthy and nutritious snack choice. Marshmallows are made from sugar, corn syrup, gelatin and vanilla extract.

That is a recipe for a nutritional wasteland. Marshmallows are also very high in sugar calories which is bad health news for dogs that are overweight or have diabetes.

It isn’t a good idea to begin feeding healthy-weight dogs sugary treats because that could become a weight problem down the road.

Are Marshmallows Good For Dogs?

As much as we’d like to think that something so yummy is good for our dogs, as well as ourselves, the truth is that they’re not good for dogs or humans.

Marshmallows are usually made from corn syrup, sugar, gelatin, and other chemicals that have zero nutritional benefits. And all that sugar can lead to obesity and eventually canine diabetes.

In fact, all that sugar is actually really bad for dogs. And some marshmallows have ingredients that are toxics for canines.

READ  How To Stop Your Dog From Jumping on You

Are Marshmallows Safe for Dogs?

Some marshmallows contain xylitol, which is an artificial sweetener. Xylitol is toxic for dogs even in small amounts. Veterinarians say xylitol can cause low blood sugar and liver damage in dogs.

Eating too many marshmallows, even ones that don’t contain xylitol can cause stomach upset in your pet.

Vomiting, diarrhea, and lack of appetite are common side effects. In more severe cases a dog may suffer seizures or become uncoordinated while walking.

If your dog has eaten marshmallows and has any of these symptoms, it is a good idea to call your veterinarian.

What Should I Do If My Dog Ate Marshmallows?

First, don’t panic because there may be no reason to do so.

Make sure there are no other marshmallows that your dog can get access to and eat. Then, check the ingredients on the packaging.

If you see xylitol listed as an ingredient, then you need to immediately contact your pup’s vet. Even if it was just one marshmallow that your dog ate, it is very important to let your vet know.

Your vet will want to know how many he ate and how long it’s been since he ate them. You may even need to bring your dog in to the animal hospital to have vomiting induced.

That’s how poisonous a marshmallow can be to a dog.

If there’s no xylitol in the marshmallows, then all you have to be concerned about is the amount of sugar that your dog has ingested. Even so, you should still call your dog’s vet for advice.

As your dog’s human it is up to you to make good nutritional choices when it comes to meals and snacks. Marshmallows are not a good choice.

Marshmallows are sugary snacks with no nutritional value that can lead to intestinal distress. If those marshmallows are artificially sweetened with xylitol they can also be toxic.

There are many safe choices in fresh fruits and vegetables to reach for instead. Your dog might want to munch on a radish or relish a cold kiwi.

Those kinds of snacks are nutritious and delicious. And much safer than a marshmallow for your doggo.