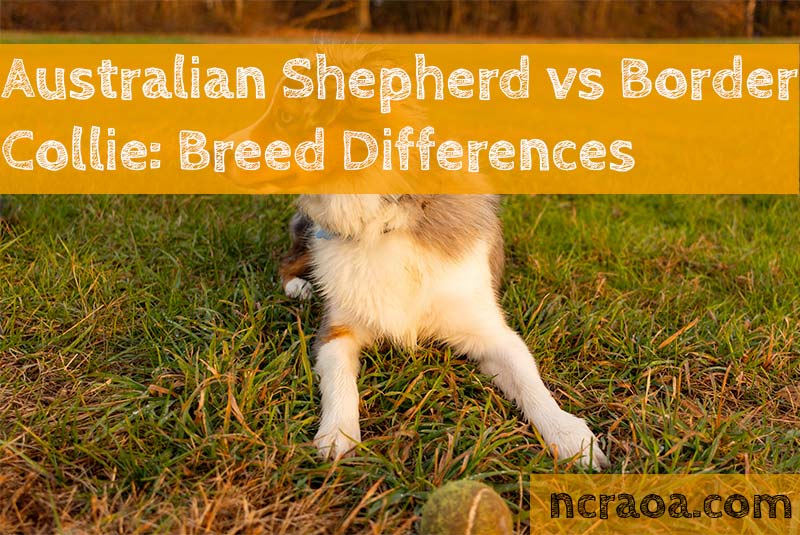 When we think of sheepdogs, the image of a border collie leading a flock of sheep, or an Australian shepherd controlling an entire herd, automatically comes to mind.

However, knowing how to identify these breeds can sometimes be a complicated task, due to their many similarities.

Likewise, if you are considering adopting one of these two dogs and you are still not sure which one to choose, in this article we will show you the differences between the Border Collie and the Australian Shepherd.

Keep reading and choose the one that best suits your needs and lifestyle!

Contents show
The History
Their Distinct Differences
Their Training
Their Environment
Their Obedience
Exercise and Diet
Their Care
Additional Care
Their Health
Their Size
Their Cost
Their Characters
Herd Dogs
Their Adaptation
Their Life Expectancy
Physical Characteristics
Border Collie Colors
Australian Shepherd colors
Hair, Ears and Eyes
In Summary

The Border Collie’s existence goes all the way back to the fifth and first centuries BC. This was at the time that the tribal Celtics brought these dogs to act as their ancestors to the British Isles.

At that time, this dog was used to keep the cattle together because of its intelligence and amazing work capabilities.

Over the years, the breed was adapted and standardized until the current Border Collie, which was officially recognized by canine organizations in the 20th century.

The Australian Shepherd is a cross between other similar dogs and the Border Collie and that is one of the primary differences between the two.

The Border Collie originated from Great Britain and is classified as a sheepdog. The dog has a well proportioned appearance; a harmonious silhouette that shows ideal balance and grace.

Any propensity for weakness is not desirable to this dog. It has docile and tenacious, alert, cunning and obedient characteristics.

It is not too aggressive, but neither is it shy.

The Australian Shepherd originated from Australia. They are much friendlier than the Border Collie.

Many of them are heavy barkers, but not harmful when trained. They get along with children more than the Border Collie.

Even though the Australian Shepherd is an intelligent herding dog, the level of intelligence cannot compare to that of the Border Collie.

Training the Border Collie will be easier, making it a perfect dog for first-time owners or those who prefer an obedient dog.

To train the Australian Shepherd, owners will need more patience and perseverance, and may even need to find a dog trainer to help.

Border Collies are dogs eager to listen and be accommodating in their environment. It is relatively easy to train this dog through appropriate techniques.

In this way, many repetitions are not necessary to get this dog to internalize an order or learn to perform its herding tasks.

The Australian Shepherd, for its part, requires a little more time and attention, although it does not usually present difficulties during its training.

The Border Collie has the advantage of being trained with ease and obedience. However, if the training is intense, he will become submissive.

Despite being gruff and jealous of other dogs, the Border Collie is great for households with unruly children.

The Australian Shepherd’s temperament is highly intelligent, easy to train, obedient and responsive. Furthermore, this dog seems to know exactly what his family expects of him at all times.

The Border Collie is a dog with an innate, inexhaustible energy. They are fast and agile and like hard work and love to play.

They also love to swim and are very good at leading lost sheep back to the fold.

Their diet is not special, but it is important that they do not gain a lot of weight, because otherwise they will become lazy.

The Australian Shepherd is an active working dog that requires large amounts of vigorous exercise to stay in shape.

And whenever possible it is best to give him some special exercise to do to keep him in shape. Their diet does not require any special food.

If the Border Collie’s coat is groomed frequently, combed and brushed thoroughly, the sheen of his coat will always be bright.

Of course, it needs special care when it is shedding the dense and soft undercoat. You will bathe the dog using dry shampoo when necessary.

It is also very important to monitor the area of the face, especially the ears and the coat, in case there are ticks.

However, sometimes it has to be cleaned with a stiff-bristled brush, but it will only be bathed when necessary.

Both animals, for the most part, get the same basic care such as exercise, food, hygiene, de-worming and required vaccination.

However, the difference between the two lies in how their coat is cared for.

The Australian Shepherd gets two baths and brushing twice per week as long as it is necessary. The Border Collie’s care is much more intense and routine.

The coat is brushed each day or four to five times per week to give it a silky and shiny appearance. One of the reasons for the extra care is that the Border Collie has a rougher coat.

READ  How To Get Your Dachshund To Stop Digging

The Border Collie breed is very resistant, however it suffers from some joint type anomalies as well as some ocular and genetic diseases. The most common is progressive retinal atrophy.

The Australian Shepherd sheepdog is very healthy and hardy, although it can sometimes suffer from hip dysplasia and eye problems.

Both of these dogs are medium sized. However, the Australia Shepherd tends to be a little taller in height and heavier in body compared to the Border Collie.

As an adult, the Border Collie would weigh approximately 20kg. The measurement would be between 46cm and 53cm.

In comparison, the Australian Shepherd would weigh up to 30kg. The measurement would be between 46cm and 58cm.

The female would be much smaller in comparison to the male for both breeds.

If both breeds are mixed, the pups cost roughly $1,000 and can be taken home when they get to eight weeks old.

Without the mixed breed, both the Australian Shepherd and Border Collie would cost about $700 each.

Some Australian Shepherds and Border Collies can go up to as much as $3,000 and as little as $600, but it depends on whether it is purchased from a breeder or the pet store.

If what you want is to train your dog to protect your home and alert you of any intruder, the Australian Shepherd is perfect for guard duty.

Due to his innate abilities, he will not hesitate to protect his human family, as well as guard the home in their absence.

The Border Collie, on the other hand, is a less vigilant dog, is well-behaved and can also learn to alert its human family, but does not tend to do it naturally as the Australian shepherd can.

On the other hand, although both breeds of dogs are considered to be herd dogs, they have been developed to fulfill different purposes for the livestock.

This is a fact that is also reflected in their temperaments and characters.

Thus, while the Border Collie is a shy and energetic dog, ideal for guiding sheep from a distance, the Australian Shepherd is prepared both to control sheep and to guide cows, buffalo, geese and any type of livestock.

Despite the above, not all are differences between the Border Collie and the Australian Shepherd, since both dogs are affectionate, faithful, loyal, attentive and active.

This means that both breeds need to get a good dose of daily care, as well as activities that keep their minds active.

READ  How Many Puppies Do Chihuahuas Usually Have In A Litter?

In general, they do not usually adapt to small flats or apartments precisely because of their active nature.

If we respect the character of each dog and take care of all their needs, the Border Collie can live up to 17 years , while the life expectancy of the Australian shepherd is around 15 years, this being another of the distinct differences between the two

Although both dogs have very similar physical features, such as long fur, they also have different characteristics that allow obvious differentiation.

A clear example of this is the range of colors for each breed, with the Border Collie having a greater range of combinations than the Australian Shepherd.

Next, we detail the colors of each dog:

Although these are the most common colors of the Border Collie, the truth is that all shades are admitted, as long as white does not prevail.

As with the previous breed, the white color should not dominate.

In addition to hair color, in terms of physical appearance, another difference between the Border Collie and the Australian Shepherd is the type of coat that both breeds have.

On the other hand, the ears of the Border Collie can be erect or semi-erect, while in the Australian Shepherd, the erect ears identifies him from a distant.

In general, the Australian Shepherd is usually prone to heterochromia, that is, to be born with different colored eyes or to show two different colors in the same eye, while this characteristic is rarely observed in the Border Collie.

Both dogs have a lifespan of 12 to 15 years. They are both energetic with average health and intelligence temperament and hard working; except the Australia Shepherd is sociable and the Border Collie is not.

The Border Collie grooms more frequently than the Australia Shepherd.

They have only slight differences in weight and height. They both cost the same; depending on a narrow criteria.

One loves children and the other is not friendly. Both are herding dogs.

Therefore, in a nutshell, there are more similarities than differences.