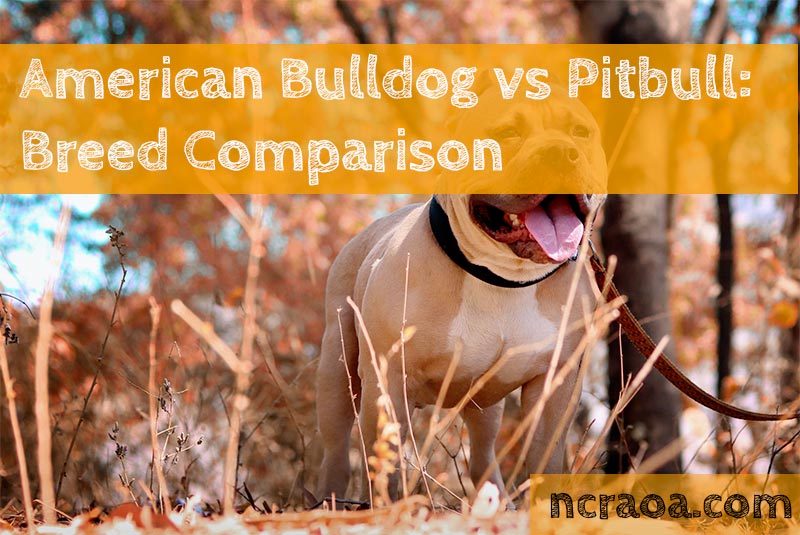 Choosing a dog can be a tough decision. Many potential pet owners have difficulty deciding between different breeds, especially when they have heard conflicting information about them.

American bulldogs and pit bulls are two of the most common dog breeds people consider for a pet. The two are so similar that they are very often confused with one another.

However, there are a few distinguishing features that separate the two.

To determine which one is right for you, it is vital to understand what makes each one unique and how well they might fit into your life.

The idea was to have an agile yet strong dog for blood sports, such as bull-baiting and dogfighting.

Pit bulls made their way to America in the late 1800s and were eventually used for driving cattle, hunting, and family companions.

The American bulldog was originally bred as hunting and guard dogs.

They were brought to America’s southern states to work with farmers and soon become the go-to source for controlling the ever-growing population of vermin and even feral pigs.

As the breed began dying out, Dr. John D. Johnson began breeding his American bulldogs with English bulldogs and saved the race.

These two breeds usually look a lot alike in many ways, as they both came from the same original breed.

Both American bulldogs and pit bulls are muscular creatures, but the pitbull’s muscles are more defined. Both are broad, but the bulldog is much wider- especially in the chest area.

Bulldogs have a large, flat head with ears that stay mostly folded over. Their nose is wide, as well.

Their jaws are very pronounced, and they often have an underbite. Bulldogs also typically have facial wrinkles.

Male bulldogs range from about 22 to 25 inches tall and can weigh anywhere from 75 to 100 pounds. Females are usually no more than 23 inches tall and weigh between 60 and 80 pounds.

All of the facial features, hefty size, and muscular features cause the bulldog to look a bit mean- almost like a bully.

Pit bulls, on the other hand, have lean muscles. Males range between 35 and 60 pounds while females are typically 30 to 50 pounds.

Males are often no taller than 21 inches and females 20 inches.

Instead of a flat, square head like the bulldog, the pit bull has a slightly tapered head. Their ears fold over sometimes, but they might also stick up like a cat’s.

American bulldogs tend to have a short, soft, shiny coat. They are usually white with large patches of color, including brown, black, and red.

Pit bulls also have shiny coats, but theirs are stiffer. They come in various colors, including red, gray, blue, and black.

Pit bulls are typically regarded as dangerous- so much so that they have been banned in many areas around the world. They are viewed as vicious attack dogs, but that is not always the case.

As pit bulls were bred for fighting, they can have a low tolerance for other animals. However, in the right hands, they can grow into a loving and loyal family dog.

They can also be very gentle with little ones.

Like most other animals, though, they are typically more comfortable with kids when raised around them. The earlier you get them, the better.

Pit bulls need to be active every day. When they are not, they get restless, and all of their energy needs an outlet.

This is typically when they become destructive. Giving them ample space to run around can help keep the energy under control.

Pit bulls also like to push boundaries, so being assertive is important. They need to know you are in charge. Be calm in your training but be tough.

It is also important to know that they have pretty short attention spans. The shorter you can keep your training sessions, the better the results will be.

A pit bull is a loving creature who is eager to please and loves to be with his or her family. You can also trust them to protect you as their breeding taught them to fight when necessary.

American bulldogs are also sweet, loving, and loyal. Many regard them as large lapdogs since they love to cuddle with their humans.

They tend to be a bit emotional, too, so they make great friends when you have a bad day or need to cry.

Bulldogs are very energetic and need a lot of time outdoors. As they were bred to be working dogs, being still is not their strong suit.

They, too, need plenty of space to run around.

Bulldogs love companionship, but they need a lot of attention. This is not a good choice for a pet if you work really long hours and will have to leave them home alone.

They are great pets for children. They are affectionate, active, social, and protective- all things kids can benefit from.

Like a pit bull, though, the best results come when they are socialized with children early.

Bulldogs are known to be more stubborn than pit bulls, and they are not very easy to train. They will quickly run over you if you do not take charge.

Hiring a professional trainer might be the best way to go because bulldogs need patience but can try that patience in a big way.

If you do not have the time or emotional energy to spend on the training, consider hiring a professional to handle it for you.

Both breeds are mostly healthy and are known for having pretty good immunity. They are prone to some health issues, though.

Some shared issues include things like thyroid defects, elbow dysplasia, hip dysplasia, demodectic mange, and hypothyroidism. They are also at risk for separate issues.

Some common troubles with American bulldogs are:

Pit bulls are expected to live anywhere from 8 to 15 years and American bulldogs from 10 to 15 years. You can help keep them strong and healthy with regular exercise.

READ  Standard Vs. Miniature Dachshund: Is There Really A Difference?

Both breeds need at least 30 to 45 minutes per day to decrease the chance of health issues.

In addition to exercise, your bulldog or pit bull needs to be brushed weekly and bathed regularly.

It would be best if you also cleaned your bulldog’s face regularly to lessen the likelihood of skin irritations caused by things getting trapped in their facial folds.

American bulldogs and pit bulls are both precious pets, and their costs can vary widely.

Neither of these breeds is better than the other. Both have unique characteristics and needs, and your choice should rely on your lifestyle and family needs.

Do keep in mind that many people are afraid of pit bulls, leading to some unfortunate trouble in your life.

Before deciding to bring one home, be sure you check with your landlord- if you are renting- to see if he or she has any restrictions on the type of dogs allowed in the home.

If you do bring one home and people see it outside, don’t be surprised to see your local animal control patrolling your neighborhood.

It’s not that they are going to come to take your dog- unless, of course, there is a law in your city or county about owning a pit bull.

It’s more that they want to make sure that it does not get free and start roaming the streets.

Additionally, your landlord or even local government might require that you have liability insurance for your pet. This would pay for any medical expenses due to a dog bite to others.

The most important thing is finding out before you bring your pit bull home.

Ask neighbors, your landlord, or your local police department or courthouse to learn any rules and requirements before choosing your pet.